The channel is bringing a musical extravaganza on November 20 from 5-7pm. The show featuring Arun Govil and Deepika Chikhalia will bring to life Siya Ram performing Chhath rituals at Ganga Ghat 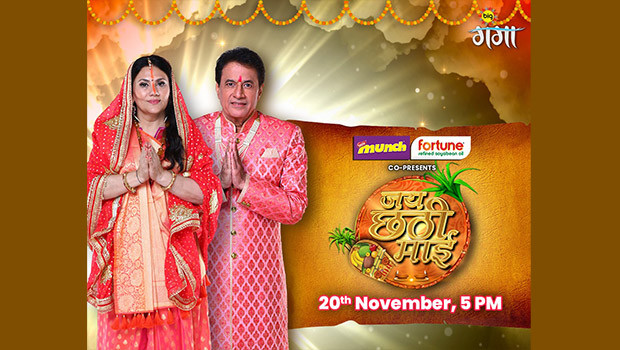 Big Ganga will elevate the fervour of Chhath by celebrating SiyaRam Ki Chhath for the first time in the Bhojpuri entertainment space. This musical extravaganza will be telecast on November 20 from 5-7pm on the channel.

The rituals of Chhath hold immense significance to Ram and Sita as per folklore dating to the ancient time of TretaYuga. The ancient belief states that Goddess Sita, on returning from exile, kept a fast and performed Chhath rituals for Lord Rama as he had committed Brahmdosh — the deed of killing Ravana, who was a high-class Brahmin and one of the most-learned men of the three realms. And based on this belief among many others, Chhath Puja has become an important Hindu festival observed by women in the UP, Bihar and Jharkhand regions. The channel through this festive offering brings on board Arun Govil and Deepika Chikhalia. The channel fosters its bond with Bhojpuri-speaking audience in these testing times by showcasing the origins of this ritual and offers them divine motivation through Divine Chhath.

The show will bring to life the most unique moment of Siya Ram performing Chhath rituals at the Ganga Ghat and receiving Chhathi Maiyaa’s blessings. The unique tale leading upto the Chhath Puja by the divine figures will be brought to life through an extravagant musical narrative show of two hours featuring Arun Govil and Deepika Chikhalia as Ram and Sita, so that viewers can relive that special moment which has to date not been brought to life in popular entertainment space. The channel will raise a motivating musical spiritual show in order to inspire its audience through divine spirit.

The grand Chhath celebration this year not only motivates the audience to have faith in the divine power but will engage them in the biggest celebration from the safety of their homes. With more series like New Year special and Faguaa Holi special among others, the channel is all set to redefine entertainment and original content for its regional audience.