Produced by BBC Studios India, the unscripted sports docu-series follows the inspiring journey of Jaipur Pink Panthers in the seventh season of the Pro Kabaddi League. It will launch in over 200+ countries and territories exclusively on Prime Video on December 4 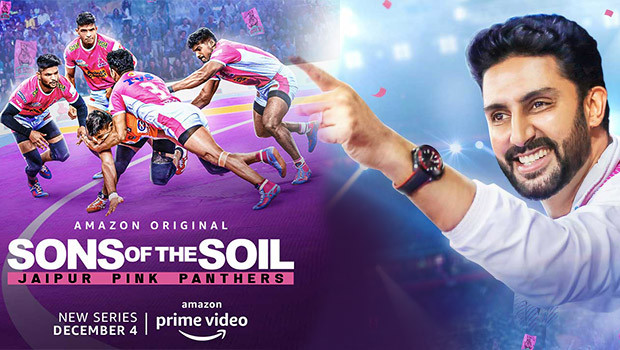 Produced by BBC Studios India, the show follows the inspiring journey and dedication of the team during the seventh season of the Pro Kabaddi League, as they strive to win the season championship for the second time after their win in the first season.

The series provides a never-before-seen locker-room view of the team, including interactions with team owner Abhishek Bachchan. Viewers will get to experience the struggles, determination, courage, hard work and passion of the team as well as their families, coaches and everyone associated with the Jaipur Pink Panther family. Sons of the Soil: Jaipur Pink Panthers is directed by British Director Alex Gale, a double Bafta Scotland-winning executive producer and director.

Prime members in India and in more than 200 countries and territories can stream all episodes starting December 4.

“Amazon Prime Video has always endeavoured to bring diverse and gripping stories to our audiences. From gangland dramas to musicals — we have developed and produced authentic stories rooted in our soil. And with Sons of the Soil: Jaipur Pink Panthers, we are extremely proud to diversify our repertoire and bring our first-ever sports docu-series in India to our viewers” said Aparna Purohit, Head, India Originals, Amazon Prime Video India. “Kabaddi is one of the oldest and much loved indigenous sports in India and this series follows the incredible journey of Jaipur Pink Panthers Kabaddi team. The series will provide a window into players’ steadfast persistence, rigorous preparation and hard-work leading up-to the 40-minute matches that audiences enjoy. The show will take viewers on an emotional journey as they follow the team not just on the mat but also get an inside look into the lives of the players — where they come from and what drives them.”

Sameer Gogate, India Business Head, BBC Studios, said, “BBC Studios has had a strong heritage and specialisation in producing documentary content globally and we are excited to bring our expertise in this genre into the India market. India is a sports hungry nation and we are delighted to collaborate with Amazon Prime Video to bring to their audience the first-ever sports docu-series on a truly indigenous sport like kabaddi. It was a pleasure to work with Amazon Prime Video, Abhishek Bachchan and the entire Jaipur Pink Panthers team, who opened up their world and hearts to us. Prime Video in India, through Amazon Originals, has presented some exciting stories for entertainment lovers and with Sons of the Soil: Jaipur Pink Panthers, fans can really look forward to an emotional and an engrossing tale of a team’s dedication and passion to win.”

Sons of the Soil: Jaipur Pink Panthers takes us through the journey of Jaipur Pink Panthers in Season 7 of the Pro Kabaddi League. Narrated by team owner and actor Abhishek Bachchan, the show follows the emotional journey of the star players, owners, staff and their families while exploring and celebrating the passion for Kabaddi across India. As the JPP team strives to reclaim the title that it had won in the inaugural season in 2014, we witness how the team’s unity is put through the ultimate test but their determination, grit and passion remains unceasing.