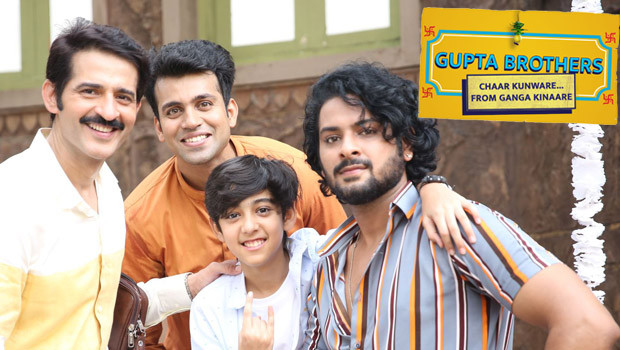 Star Bharat has launched a new fiction ‘Gupta Brothers Chaar Kunware from Ganga Kinaare’ from October 5, showcasing the story of self-reliant brothers who are enjoying their bachelorhood  and do not feel the need to get married. The show will air Monday to Friday at 9.30pm.

The slice-of-life dramedy will mark the comeback of actor Hiten Tejwani in a brand new avatar. He will be seen essaying the character of television’s most eligible bachelor Shiv Gupta. Produced by Mahesh Pandey productions, the ensemble cast includes names such as Sonal Vengulkar, Parineeta Borthakur, Satya Tiwari, Akash Mukherjee, Meet Mukhi and Rinku Dhawan.

Set in the backdrop of River Ganga, ‘Gupta Brothers – Chaar Kuware from Ganga Kinaare’ will entertain the audiences with the simplicity of the four brothers who are self-reliant, courageous, multitasking compassionate and full of life. While every unmarried girl dreams to woo these eligible bachelors, they on the other hand don’t wish to get married. They don’t disrespect women but they think they don’t need women in their lives as they are capable of doing anything and everything on their own. The brothers are there for each other and their comradery will make the audience smile. The show is a complete entertainment package and looks at the whole concept of Shaadi Hai Barbadi through a humorous lens. The viewers will be taken on an emotional joyride, which revolves around these four brothers and their escapades avoiding eating the proverbial Shadi Ka Laddoo.

Actor Hiten Tejwani said, “My character, Shiv Narayan Gupta, in the show is of a simple man who lives by the rules of being a responsible elder brother and who does not believe in marriage or having a woman in his life. We brothers are Hanuman ji’s bhakts and believe in respecting women but don’t need them as companions. We are self-reliant and can do everything that a woman can do. It is now up to the audience to find out why we think ‘Shaadi is Barbaadi’ (laughs). I feel with the high drama and complex stories on television these days, it is now time to entertain the audience with dramedy which revolves around a relatable simple story.”

Sonal Vengurlekar said, “It gives me immense pleasure to be a part of Gupta Brothers Chaar Kuware from Ganga Kinaare. Working alongside such an elaborate star-cast with an interesting story line is something I could never say no to. This is the first time I will be a part of a male centric show and I am really looking forward to see the response we get for the show. We hope and pray the audience enjoy watching our show as much as fun we had shooting it.”