The FIR based on a complaint filed by Shashikant Pawar, a sub-inspector posted at Mumbai Police’s social media lab alleged that the editors “conspired” against the state government and senior police officers of the Mumbai Police to “intentionally create a sentiment of disaffection and hatred” 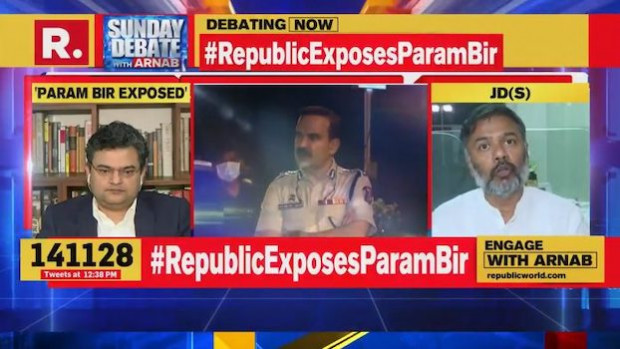 Arnab Goswami-led News Broadcasters Federation (NBF) has said it expresses its deep concern over the FIR filed by the Mumbai Police officials naming the editorial staff of one of our member news TV channels – Republic TV.

NBF said in its statement, “Filing of an FIR under a harsh and severe law is a drastic and desperate measure against both the media as well as the common citizens at large. Journalist(s) performing their professional duty, within the ambit of law, by holding public servants accountable and unraveling the truth in public interest should not be chained down by such attempts, as it is a threat to democracy.

“Journalistic freedom should be respected as it forms the base of any democracy and the Freedom of Speech and Expression as guaranteed under Article 19 (1)(a) of the Constitution of India. We firmly trust the process established by law and the judiciary. Justice shall prevail.

Greater Mumbai Police officials at the NM Joshi Police Station, Mumbai on Friday, October 23, 2020, have filed an FIR naming Republic TV editorial staff accusing them for airing a television news report which amounted to incitement to disaffection among members of the police force and defamation of the Greater Mumbai Police department.

“The FIR has been filed on the complaint by sub-inspector Shashikant Pawar, who has accused the said journalists for an offence under Section (3) of the Indian Police (Incitement to Disaffection) Act, 1922 – a Central law, along with certain sections under the Indian Penal Code.”

Sub-inspector Pawar has alleged that the editors mentioned in the FIR “conspired” against the state government and senior police officers of the Mumbai Police to “intentionally create a sentiment of disaffection and hatred”.

“Knowing that there is a possibility of creating a sentiment of disaffection, without any credible information or proof, they telecast that Mumbai Police officers are preparing to rebel against Mumbai Police Commissioner Param Bir Singh and that there is dissatisfaction against him,” the FIR said, quoting the complainant.

“They defamed the Mumbai Police force where I am working and which has a bright tradition,” the complaint added.