Aimed at educating and encouraging organ donation amongst youth, MTV launched the campaign during ‘Joy of Giving Week’ 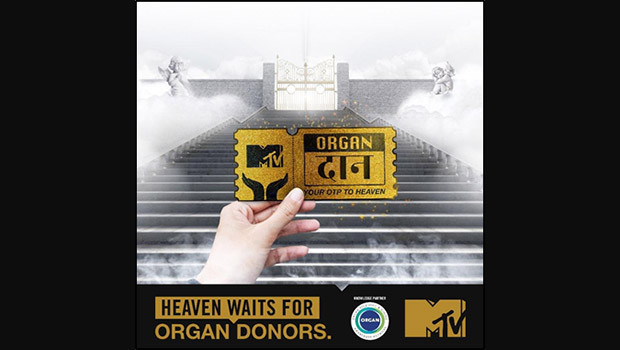 Not all superheroes wear capes; some choose to become organ donors instead and make a difference. Yet, in India, less than one in every ten lakh people donate their organs after death. In a nation of 1.3 billion, our Deceased Organ Donation rate stands at 0.52 per million population today, plagued by abysmally low participation, myths and limited awareness. It’s time to trigger a change and in a way that MTV aces at. India’s No 1 Youth Entertainment Brand along with its knowledge partner Organ India, an initiative of the NGO Parashar Foundation, has launched an action oriented campaign,  MTV Organ Daan – Your One Time Pass (OTP) to Heaven, to add a unique twist to the gift of life. With a fine blend of quirk and impact, this campaign aims to drive awareness about organ shortage in India and encourage people to sign-up to be organ donors after they are gone.

Speaking about the campaign, Navin Shenoy, Head of Marketing – Youth, Music and English Entertainment, Viacom18 said, “As a brand, we’ve always believed that youth will lead change in our society. According to MTV Insight Studio’s research, 81% of young Indians have actively started supporting cause-led initiatives. So, they have started turning armchair activism into actual action. Whether it is through our brand campaigns or original programming, we believe that the soft power of media can be a catalyst to this change.” He further added, “With MTV Organ Daan, we aim to drive a conversation around the need for organ donation and primarily encourage youth to register as donors.”

“We are thrilled to be a part of the MTV Organ Daan Campaign,” said Anika Parashar, Chairperson, Parashar Foundation. “We have seen the miracle of organ donation in our family. My mother, Former Chairperson, Late. Ms. Kirti Parashar, received a life-saving heart transplant that gave her 5 more years with us. It was possible only because someone donated their organs upon their death, and saved so many lives, including my mother’s, and we are truly grateful for that.” Sunayana Singh, CEO, ORGAN India said that “We have made it our mission to sensitize the public about deceased organ donation. We believe that MTV Organ Daan campaign is the perfect way to inspire the youth of this country to leave a legacy that spans many lives, and that too in a way that appeals to them.”

Bollywood actor Arjun Mathur who came on board to echo the need for awareness amongst masses, said “Organ Donation is a cause I feel strongly about for I have seen its impact quite closely. Despite the deluge of information available on this issue and the alarming data, there is a long road ahead till we rise up as a society and pledge to make a difference. I am glad to associate with MTV ORGAN Daan and with ORGAN India for a need of the hour initiative that aims to evoke awareness around organ donation in India and urge the youth to come forward and participate. As a part of this campaign, I am happy to catalyse this change and focus on the need for the most valuable gift of life.” Launched  during the Daan Utsav, i.e. the Joy of Giving Week (Oct 2-8), MTV Organ Daan will be an on-going initiative that aims to catalyse the youth around the most honorable form of ‘Daan’- the gift of life. With a strong meld of humour and quirk at its core, MTV has curated this campaign around the prevalent Indian belief that ‘Punya/Good deeds are a gateway to Heaven’ and Organ Donation can surely help one reserve a spot up there. This call to action thererby aims to encourage sign ups as organ donors.

Starting off with the campaign, MTV put out a series of interactive social media posts to debunk existing myths around organ donation along with an insightful infographic that reflected  the enormity of the issue in India. From the right age of donating to the different organs one can donate and the protocols involved, MTV rode on innovative messaging, memes, comic strips and out of home branding to cater to the limited attention span of today’s youth urging them to come out in large numbers and support this cause.

As a central messaging tool, two brand film that depicts the campaign idea of One Time Pass to Heaven has also been created. The film delivers the message of ‘Organ Daan’, ensuring a mass appeal in the ‘classic’ MTV way. In addition to being promoted on MTV India’s social handles, the films will also be aired across channels in the Youth, Music and English Entertainment cluster of Viacom18. With this campaign, MTV and Organ India eventually aim to trigger sign ups on  www.mtvorgandaan.com , urging Indians to become Organ donors. On signing up, an auto-triggered personalized ‘One Time Pass to Heaven’ will be available to the participant to share on their personal social media handles as a proud Organ Donor. This will eventually be followed by the actual organ donor card.

Official Data suggests that One Organ Donor can save up to 8 lives.* That’s the power of this precious gift of life. Imagine what we can achieve if majority of us choose to do the same. So, without further ado, pledge to make a difference, stand out and get your heaven ka One Time Pass (OTP) with MTV ORGAN Daan!!