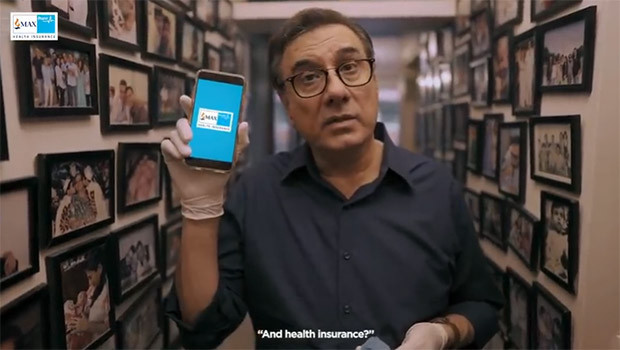 As part of the campaign, Isobar India, the digital agency from the house of dentsu international, has conceptualised and executed a digital film for Max Bupa. The film features Bollywood actor Boman Irani who speaks on the importance of health insurance in these uncertain times. The objective of the film is to trigger awareness around health insurance and establish it as one of the critical tools in fighting Covid-19. The thought, therefore, was brought to life by drawing a parallel between today’s health necessities such as gloves, masks, sanitisers, and health insurance.

The film opens with Boman Irani putting across a question to the audience. He wants to know if the viewers are fully prepared to step out. He ticks off a mental checklist, reminding everyone of the necessary safety measures that must be taken before heading out. Towards the end, he poses a question to the same audience about health insurance. The film ends with him introducing the Max Bupa product proposition that ensures affordability and leaves the audience with the question — “If you’re not going to buy health insurance now, then when?” The end message of the film emphasises the reality of today that the most appropriate time to buy health insurance is now.

Created and conceptualised in the ‘new normal’, the film was directed virtually. Keeping in mind the government regulations, the film was shot at Boman Irani’s home with only his family members present. The entire creative and production team handled the shoot through video conferencing. Anika Agarwal, Director, CMO and Director, Digital Business, Max Bupa, said, “We launched the #AbNahiKharidogeToKab? campaign to highlight health insurance as an absolute necessity and priority for everyone, especially now when Covid-19 cases are rapidly increasing in the country and medical costs are skyrocketing. Health and protection have become the key themes for consumers in these times and the awareness of health insurance as a category is at an all-time high. So the need for us as a brand to communicate effectively with consumers that this is the right time to buy health insurance, was key. The film highlights the value-for-money health insurance proposition from Max Bupa, which is a prudent choice for customers in these trying times. We believe Isobar has put across the point wonderfully through the digital rendition of the film.”

The digital film has been released on YouTube, Facebook and Inshorts. Additionally, an edit of the film is spreading the message of #AbNahiKharidogeToKab? on Hotstar during IPL live broadcasts.

Gopa Kumar, COO, Isobar India, said, “If this year has taught us one thing, it’s that Health Comes First and that we should be prepared at all times with the right tools to protect our health. That’s the kind of awareness we wanted to generate among the audience with #AbNahiKharidogeToKab?. We wanted to strongly encourage health-first thinking and establish that health insurance is now more important than ever. It is a necessity of today that cannot be put off till tomorrow anymore. So, with our digital film and communication, we created that sense of urgency by giving health insurance an equal prominence as we give to masks today.”

Vibhor Yadav, Senior Creative Director, Isobar India, added, “As the Covid-19 situation brought movement to a halt and made all businesses to operate from home, it also changed the entire course of filmmaking. #AbNahiKharidogeToKab? is a testament of these modern times that we are living in. Shot during the nationwide lockdown, the entire production of the film was successfully managed and executed over a Zoom call. In these current times, a message as crucial as protecting health and investing in health insurance had to be put out without any delay and that’s why teams did not shy away from taking up this never-before done task of Shooting from Home.”