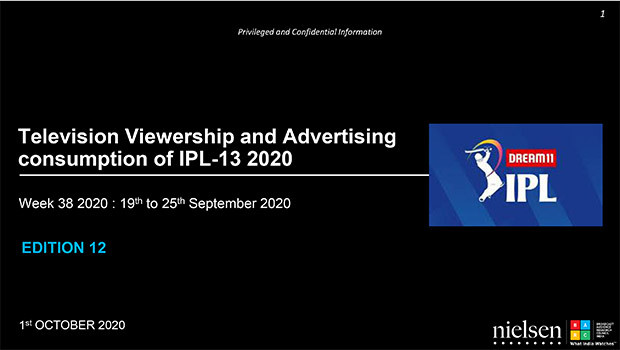 The joint industry body and the country’s sole currency of television audience measurement, BARC India today released a 27-page analysis for the first time, highlighting Star India’s growth this IPL season at a time when the cricketing extravaganza is just in its second week. No broadcaster, be it Sony or Star, has ever been able to pull off this “first-of-its-kind” report on IPL viewership.

According to the BARC India report, Star India witnessed 15% growth in viewership and 21% growth in Impressions despite fewer channels and one less match in the opening week.

BARC India also highlighted the growth in the total advertising volume for IPL 2020 opening week, which is 15% higher than the 2019 opening week. The joint industry body presented a match by match analysis of the ad volume growth.

The joint industry body also emphasised on “massive gains” seen in audience base for Hotstar, sports apps and fantasy sports.

In opening week, 21% growth in average impressions per match vs. 2019, despite one less match and fewer channels than 2019

*OTT has witnessed a 32% increase in user base for the IPL week over the previous week, primarily driven by massive gains seen in Disney+Hotstar.

Click here to view the one of its kind analysis done by BARC India, a joint industry body, for the first time for IPL.