Will CarDekho touch hearts with 'The Everyday Hero'?

While CMO Gaurav Mehta explained various aspects of the campaign to BestMediaInfo.com, creative experts said the brand's attempt to connect with consumers at emotional levels is exemplary but the product integration could have been stronger or maybe a little earlier 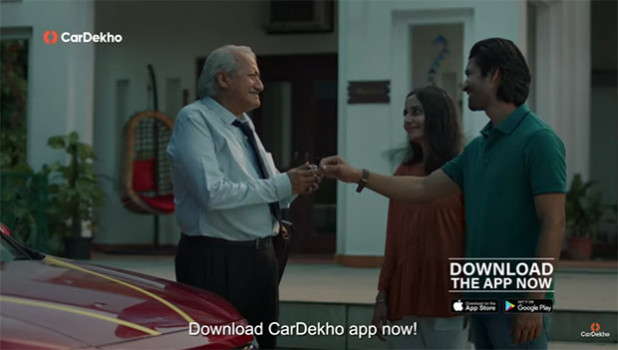 CarDekho, the seven-year-old full-stack auto tech company, recently launched a campaign, 'The Everyday Hero'— based on the real-life story of Rajdeepak Das, CCO and MD, Leo Burnett, South Asia, and his father.

The film conceptualised by Leo Burnett India captures the relevance and reliability of a safe commute with a heart-warming story depicting a retired doctor who decides to resume his duty against the wishes of his family. They realised that although they can't shake the doctor's indomitable spirit, they can help him stay safe by buying him a car that limits his exposure to public transport, thereby underlining the message of safety and security. Gaurav Mehta, Chief Marketing Officer at GirnarSoft (CarDekho, Gaadi.com, ZigWheels), said the campaign has an absolute universal truth that is common across cultures, languages, regions. These are human values, a son's love for the father's security, and a doctor's passion for serving the sick. Every person across the country would relate to the emotion and concern shown in the campaign.

"When Raj and Arjuna (ECD, Leo Burnett) first narrated the story to me, it pretty much took five seconds for approval."

The brief to the agency was how to make people mobile while keeping them safe and to create an impact during the festive season. "The festive season is a good transaction period; not only for the auto sector but for the entire Indian economy and so we wanted to be there," Mehta said.

Talking about the campaign’s insight, Mehta said when the economic indicators started becoming a bit stronger after the bloodbath created by the lockdown, people became slightly more confident and started moving to workplaces or wherever they want to go. This improvement in consumer behaviour helped the brand with the insight.

"People are moving out and are concerned about using a potentially unsafe mode of transport. That's why we thought of helping out to give the right information to consumers, and that's how the whole genesis of this ad came." Das said, "With the current situation dictating personal mobility as one of the critical measures for safety, online car buying has seen a significant boost. The good news is with the new behaviour, CarDekho is becoming the first choice for most buyers.”

According to Mehta, the search for personal mobility increased in the last six months. It made a lot of sense for the brand to shape consumer behaviour in the right manner. The brand penetration is not the problem, but it's more about the people who might not have been buying a car and to remind them that there is a better way of buying a car. That's the business objective the brand wants to achieve from the campaign.

The brand is going to launch marketing initiatives throughout the festive period in some state or form. "Right now, we have two campaigns running. One is for CarDekho and the other for BikeDekho and we will extend these two campaigns into the festive season," Mehta said.

Along with the 'The Real Hero' campaign, the brand has launched the first-ever ad campaign for BikeDekho, a sister brand in the two-wheeler category.

All these campaigns are going to be offline and extended online. The media mix is different for different campaigns. The two-wheeler business is more in tier II, III, and so the brand's media mix for the BikeDekho campaign will be different for those demographics.

The campaign objective for the BikeDekho campaign is to digitise the user base and potential buyer base of two-wheelers through BikeDekho.

Happy with the campaign's performance in the first week, Mehta told BestMediaInfo that the brand is witnessing increased traffic and leads.

"The brand's website traffic has gone up in the first four days of launch on September 19. The leads have gone up by 26%, the brand search for CarDekho on Google has gone up, and app downloads are up by 30%."

Is the campaign a hit or a miss?

Anish Varghese, Chief Creative Officer (CCO), Isobar India, thinks the brand has connected with excellent insight. Various studies suggest that in the new normal, used cars sales will go up because people would want to travel safely and avoid travelling in public transport. In that case, people will start investing in second-hand cars rather than buying a new car, as buying a new car is a large task. In that context, this campaign is very relevant, and being based on a real-life story makes it more authentic.

Varghese sees a strong brand connect here, which they have nicely married the insight and the real story. "The brand is respecting the Covid warriors, while it conveys the story via a doctor. The son and daughter-in-law are shown respecting their father and hence reward him with a very good gift from CarDekho." Sraman Majumdar, Senior Creative Director, Brave New World, said, "The words' relatable' and 'topical' are thrown around like so much loose change, but this one hits a rare spot."

Majumdar said a simple brand benefit is woven into a very familiar short code from our lives this year. The parent is determined to do what feels right, their children worried about them navigating the 'new normal', and the brand is making an elegant Ex Machina entrance. "The cast, the sound design, nuanced reactions, smart little outtakes — such a charming balance of message, storytelling and the current reality," he added. Adarsh Atal, Director, Creative and Content at Tilt Brand Solutions, said the mockumentary style of storytelling adds a tone of voice to the commercial that's unique.

He said the ad could have easily fallen into the trap of consciously juicing emotion out of the story and making it a tearjerker. He said, "I am glad the makers avoided that approach. It feels a lot more genuine and fresh when told this way. Personally, I quite like the way the commercial is executed."

Rikki Agarwal, Co-Founder, Chief Business and Operating Officer at Blink Digital, said, "The video addresses the issue in a fun manner rather than taking the serious route, which makes it endearing and relatable for viewers."

Although he pointed out, "The only issue that I have is the length of the film. Average watch time on digital videos is less than 10 seconds and so shorter the video, better it is for consumption." Dalbir Singh, Co-Founder, Kiss Films, said, "It's a nice ad, relevant to the time. I especially like how the father is the hero, something we don't often see in our ads. The script is non-preachy, and I like the little banter between father, the husband and the wife. Almost feels like a short movie."

"I think the insight is very nice, but I somehow found the storytelling to be paltered because it's making the point in a very plain manner, it's not very sharp storytelling while the emotion is correct, the storytelling could have been better," felt Abhik Santara, Director and CEO of Atom Network.

Santara said product integration could have been made more strongly or maybe a little earlier in the storytelling. He said, "The brand really rode very high on the emotion and probably forgot to get the product brand integration." Samit Sinha, Founder and Managing Partner, Alchemist Brand Consulting, said, "It is good that the brand acknowledges the unsung heroes in the campaign, but the connection between the brand and the fact that they recognise the role of the doctor is a little weak.”

He said, "To link CarDekho with acknowledging everyday heroes is a little bit of a stretch. It would be great if a particular brand from a particular category had a very tight connection with the theme itself. It looks like the theme existed independently, and the brand and category existed independently. Both were trying to force-fit to each other rather than it coming organically."

Tags: CarDekho The Everyday Hero
Advertisment
More from this section