The campaign by Chrome Pictures reflects the intrinsic values of EbixCash. It shows how a group of kids make a successful effort in stopping deforestation 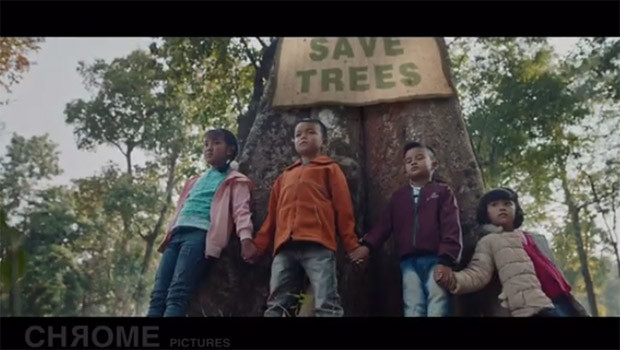 EbixCash, the digital financing system that deals in digital cash in India, had recently launched their first-ever ad campaign ‘Har khushi ke liye kaafi hai’. A campaign with each of the advertisements reflecting the intrinsic values that the brand EbixCash stands for. It speaks about the being the voice of voiceless and the measures that needs to be taken for the betterment for coming generations.

Ad production house Chrome Pictures is involved in “campaign thought” for the brand, conceptualising, scripting, direction and production of the entire ad campaign. This entire process was spearheaded by Chrome Pictures and their creative team under the leadership of Hemant Bhandari, Director, Producer and Co-Founder Chrome Pictures.

The ad touches upon deforestation and how a group of kids make a successful effort in stopping deforestation.

Hemant Bhandari, Director, Producer and Co-Founder Chrome Pictures, said, "We all know that every living existence on this Planet Earth depends heavily on trees or forests for their subsistence, both directly, for food and fuel, and indirectly for soil stabilisation and water purifications. So if we allow these mute important creatures to be struck down to the ground, it will lead to a self-created destruction by affecting climate. Great scientific evidence is beginning to accumulate, showing how the climate breakdown is likely to affect our food supply. Already, the population around the globe is being continuously hammered by decreasing agricultural yields, drought, floods, fire and locusts. When we call such hazards ‘historical’ or ‘biblical’, we are trying to say these happened long ago, to people whose lives we can scarcely imagine. Now, with increasing frequency, they are happening to us. This film is a dedication to all those great people who are putting their lives at risk to speak for these voiceless creatures. The demonstrators use a non-violence method to stop tree cutting by using embracing trees.

“In these tough times of Covid19, I have developed the trust, I have become hopeful and highly optimistic by seeing how the world reacted in a unified way to respect the lockdown for the betterment for our human race. We will do the same in future if asked for the betterment of our future. Frequent awareness campaigns need to run throughout the world to make understand the people its need. We are grateful to Robin Raina, CEO, EbixCash, to have given us an opportunity via this TVC to spread this message in a beautiful relatable manner which is very close to my heart.”

Robin Raina, Chairman of the Board, President and CEO, EbixCash, said, “Chrome Pictures managed to create a diligent, thoughtful and a provoking campaign for EbixCash, which we believe will have lots of longevity, especially since this is our first-ever ad campaign since inception. Hemant brought on board a fresh and innovative thought process in understanding the innate facets of the human psyche which were crucial is communicating the key brand messages of our product to the end consumer. Chrome managed to very strategically communicate what the brand envisioned and married that idea very tactfully with what a consumer could potentially want from the campaign in terms of the services we provide them. I am pleased to see that the campaign manages to inspire and yet make you smile, which was our biggest challenge considering the aggressive timelines that were set up to launch it.”

Released TVCs of the campaign: