The channel lines up bouquet of offerings including Chhithi Aaye Hai – an engagement drive, the I-Day rendition of its brand song, patriotic movie line-ups along with the World Television Premiere of Army Ki Jung on August 15 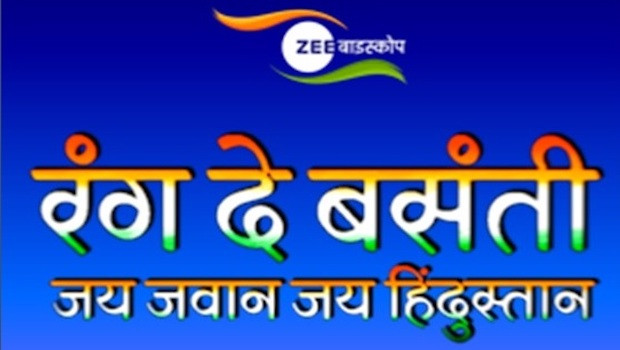 History has witnessed the great and gallant contributions of the Bhojpuri region since India’s freedom struggle. Bihar and Jharkhand take pride serving in the army, the police or IAS. Their undying passion in contributing to the society and the nation is admirable.  It’s the valour of these bravehearts that keeps our head held high with pride. This Independence Day, ZEE Biskope rejoices the fervor of these heroes who protect our freedom by guarding the borders. The channel launched Rang De Basanti – Jai Jawan Jai Hindustan, an I-Day special bouquet of offerings that goes beyond being just a campaign. With the objective of saluting the courageous men in uniform, the initiative encapsulates a patriotic saga dedicated to the Indian Army especially the Bhojpuriya Jawans.

Launched on 7 Aug, the category first initiative – Chitthi Aayi Hai invites viewers to write a message for our soldiers in the most authentic form of communication – letters. When posted at the borders, the only form of communication that the Jawans eagerly wait for are letters that carry the warmth of their loved ones. Viewers can share their hearts out through a letter, a handmade card, a sketch, Rakhis or any other gifts to express their gratitude for those serving in the Indian Army. These should be posted to Zee Biskope by 20 August along with the sender’s name, address and phone number on the given address: Zee Biskope, Zee Entertainment Enterprises Ltd, 18thFloor, A-Wing,Marathon Futurex, Lower Parel, Mumbai- 400013. The best of the messages will be reached out to the Jawans showcasing the love, respect and blessings the countrymen hold for the real-life heroes.

When it comes to patriotism, music unites people like no other means. Elevating the essence of patriotism, Zee Biskope launches the I-Day version of its brand song – “Aanthon Pahariya Lade Veer Bhojpuriya", again as an ode to the Bhojpuriya Jawans. Written and arranged by popular names in the industry – Navin Ojha & Govind Ojha respectively, the special rendition of the song reflects the bold and enthusiastic spirit with which the brave soldiers fight for our motherland.

Rejoicing the spirit of our warriors, Zee Biskope presents the World Television Premiere of blockbuster film, Army Ki Jung which will be telecasted on August 15 at 6:00 PM. Directed by Ranjan Sharma, the movie depicts the heroism of the Indian army when it comes to protecting the nation from a terrorist attack. Arun Ojha – the lead actor of the film hails from an army background with both his father and younger brother having served in the Indian army for long years. Jyoti Kalash – another lead actor is a senior IAS officer in real life who associated with the film only to motivate the youth to join the army.

Amarpreet Singh Saini, Business Head, Zee Biskope and BIG Ganga, said, “The core strength of ZEE Biskope is in its thought leadership. The entire Rang De Basanti campaign has been curated to serve the high regard that the region holds for the sons of the soil protecting our borders. As a brand, Zee Biskope has always believed in rejoicing every emotion of its viewers. Independence Day bouquet is yet another milestone to achieve that through a comprehensive offering. We not only raise the entertainment quotient through our content line-up but provide viewers with a novel platform through Chitthi Aayi Hai, where they connect with the brand for a larger purpose that is close to their hearts. I wish all our viewers a very Happy Independence Day. Jai Jawan, Jai Hindustan!”