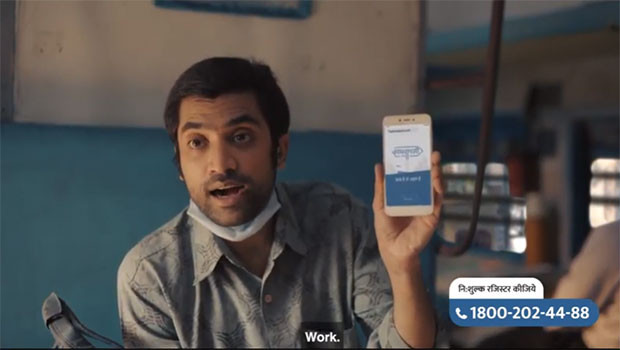 To reintegrate displaced migrant workers with the economy, Lowe Lintas had recently announced the launch of Kaam Wapasi, a unique tech platform. It helps migrant workers return to work and simultaneously assists employers with access to a pool of skilled and unskilled blue-collared manpower. To build awareness, Lowe Lintas has launched a national campaign, leading with television, on channels of Zee Network this week.

The films are centred round the migrant labourers who have used the Kaam Wapasi platform to register themselves and have landed jobs. The first film highlights how one migrant, who is all set to travel to a big city, enters a train compartment. As he introduces himself to the fellow passenger, he talks about his preparedness as he brings along groceries, stove and essentials as part of his unplanned stay in the city, in search of a job.

The fellow passenger looks like a light traveller and gets asked about his plans and how will he sustain during his stay in the city. The fellow passenger replies with confidence that he had landed a job using the Kaam Wapasi platform and is not going in unprepared into his city life.

The second film highlights a job-ready migrant buying a ticket to his destination, well knowing his route and well prepared after using the Kaam Wapasi portal for job.

Prateek Bhardwaj, CCO at Lowe Lintas, said, “What does a job in hand mean to a migrant worker returning to the city? It means being able to return with dignity, self-respect and a sense of control over one’s destiny. That’s what Kaam Wapasi is about. That’s what our campaign is about. Working around the simple idea of ‘Kaam hai to jahaan hai’, we’re urging migrants to return with clarity and confidence.”

Shantanu Sapre, Executive Director, Lowe Lintas, said, “We didn’t want to dwell on ‘what had happened’, but were more keen to depict ‘what can happen’, thanks to kaamwapasi.com. To that end, the authenticity of the initiative had to come through in the campaign as well, and we are very happy with the way the campaign has turned out. The airtime support from Zee Network and Radio City, Bharati Airtel’s support in pushing texts to their database and in managing the OBD and IVR mechanism, payments management by Axis Bank along with its branch and ATM network for on-ground support, and Razorpod’s tech backbone have all come together to ensure that the initiative is a success. We are sure we will see a lot of registrations and job matches happening from the get go.”

The campaign is live on the YouTube and Zee network, which has a strong presence in the geographies that reach audiences of kaamwapasi.com and potential employers.

The films are part of the amplification of the initiative to target 1 million jobs, ensuring mass outreach to a wide range of people seeking help and employers.