The documentary shines a light on the valour and sacrifice of Indian soldiers, the unsung heroes of World War I, premiering on August 15 at 9 pm 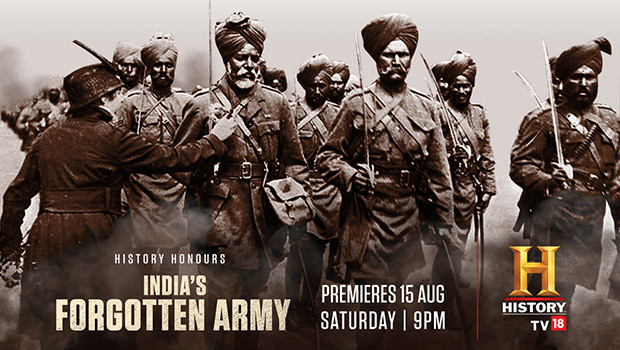 At the start of the war in 1914, over thirteen lakh Indian soldiers began to be shipped overseas to fight alongside the British Army. Of them, 75,000 were never to return home, killed in combat on faraway battlefields. Using rare archival footage, first-person narratives, and expert testimonials, the impeccably-researched one-hour documentary investigates India’s role in the first global conflict. It also recognises and documents the sacrifices of thousands of Indian families, thus restoring to India’s unsung heroes, their glorious and rightful place in history.

As the guns fell silent towards the end of 1918, the First World War had raged for almost five long years. It had come to be known as The Great War, “the war to end all wars.” It had caused devastation at such a large scale that most people believed that humankind would never want to go to war again. Millions of soldiers of various nationalities had fought and died on both sides.

However, very little is known about the Indian soldiers deployed on foreign soil all over the world. At the time, the leaders of India’s freedom struggle had hoped that sending our men to support the British war effort would make it possible to gain greater autonomy for India. But those hopes proved futile. Instead, imperial Great Britain even denied India due recognition for her role in winning the war. The men were forgotten. Their enormous sacrifices lost to time, unrecorded by history. Indian Member of Parliament and former Under-Secretary-General of the United Nations, Shashi Tharoor, says in the film, "No country lost as many people from any colony in the Empire, as we did and yet, I'm sorry to say, it was given very little attention. Indians sacrificed an enormous amount, and some of their letters, all of which were censored, are deeply moving."

‘India’s Forgotten Army,’ premiering on August 15, Saturday, 9 pm, is an attempt to trace and document the courage and sacrifice of Indian soldiers, shipped to distant shores to live and fight in deplorable conditions. The film also uses first-person accounts to tell the story of the war and the circumstances that Indian soldiers faced, as revealed in the letters they wrote to their families, more than a hundred years ago. Viewers will also hear from the descendants of those who fought in The Great War, along with leading personalities. The documentary takes viewers to the sites of battles, memorials and war archives around the world, bringing together military experts and historians, to uncover hidden facts and retell forgotten stories. The documentary has been adapted from the book, ‘World War Sikh: Memoirs Of An Indian Cavalryman 1913-45’ by Rana TS Chhina.

Avinash Kaul, Managing Director A+E Networks | TV18 and CEO-Broadcast for Network18, said, "In our continuing endeavour to offer top-drawer Indian and international content, HistoryTV18 brings to its viewers the remarkable, untold story of the Indian soldiers who fought in the First World War. Their military prowess helped shape the course of human history.  We salute them and their families for their incredible bravery and sacrifices."