‘Gallantry at Galwan – A Tale of Valour’, a special documentary on Galwan martyrs this Independence Day on Times Network

The documentary will air on August 15 at 1pm and August 16 at 10 pm on Times Now, Times Now World and Mirror Now 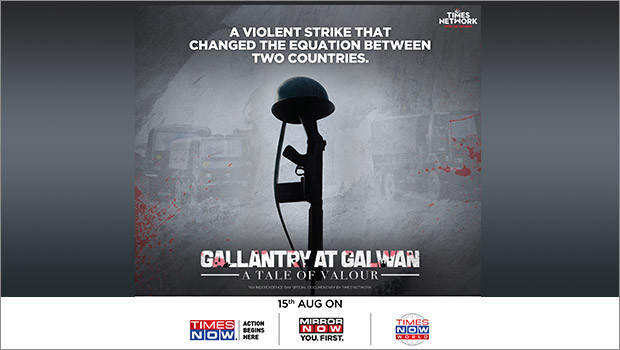 Saluting the brave Galwan valley martyrs, broadcast network Times Network will release a special documentary, ‘Gallantry at Galwan – A Tale Of Valour’, this Independence Day. Marking two months of the deadly Galwan clash, which witnessed the heroic sacrifice of 20 brave soldiers who valiantly fought Chinese transgression in Indian territory, the special documentary scheduled for telecast on August 15, at 1pm on Times Now, Times Now World and Mirror Now brings forth the story of grit and raw courage of these soldiers.

A 45-minute succinct account of factual events that took place in the intervening night of June 15-16 in the Galwan Valley of eastern Ladakh, the documentary analyses the bloodiest engagement between Indian and Chinese troops in 45 years and aims to inform the viewers about the history of border dispute between the countries and reflects on how tensions unfolded over the years. Accessing high technology tools like 3D graphics and Google Earth studio, the documentary brings a comprehensive narrative of the circumstances that led to the fatal face-off and how men of 16 Bihar Regiment crushed the Chinese aggression.

Vivek Srivastava, President, Strategy and Business Head, News and English Entertainment Cluster, Times Network, said, “Celebrating India’s undying spirit, ‘Gallantry at Galwan – A Tale Of Valour’ is our tribute to the selfless brave soldiers, who lost their lives in the line of duty. The Galwan Valley clash was a violent strike that changed the equation between two countries. Bringing an accurate account of the battle and the decade long territorial dispute between India-China, the documentary is an essential viewing for every Indian citizen, as it unravels every crucial aspect of the border dispute.”