It was like drafting the constitution of a great nation called intimacy in just three words “It’s between you”, says Josy Paul, CCO and Chairman BBDO India and the Global Creative Lead for WhatsApp 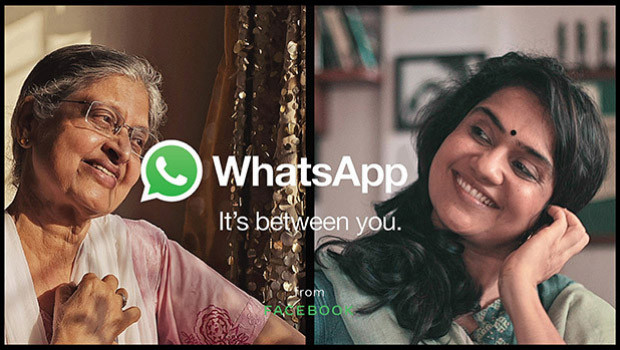 Privacy gives people the ability to communicate as their true selves. During the ongoing time of physical distancing, WhatsApp has become a prominent medium of communication to many.

Facebook-owned messaging app WhatsApp recently launched its first global campaign, ‘It’s Between You’. BBDO has helped in developing and executing the integrated campaign. The agency has collaborated with teams across five countries in different time zones – from briefing to strategy to creative brainstorming.

‘It’s Between You’ is the first brand campaign of WhatsApp in India and it talks about the importance of privacy and how it leads to people experiencing real relationships.

The two films beautifully convey that social distance doesn’t mean emotional distance and both are at two ends of a spectrum, showing the emotional range of intimacy that people experience on the platform.

The company is making a significant investment to run this campaign across India, speaking to users of all kinds. These films will be seen communicating in English and seven regional languages — Hindi, Bengali, Assamese, Oriya, Gujarati, Marathi and Kannada.

“Respect for our users’ privacy is coded into our DNA — we remain committed to helping connect the world privately and protect personal communication in India and over the world. As we conduct more of our lives online, protecting our conversations is more important than ever. Private conversations that once were only possible face-to-face, now take place across great distances through instant chats and video calling. There are so many significant and special moments that take place over WhatsApp. So we believe that your private conversations deserve to stay where they should and that’s between you,” said Avinash Pant, Director, Marketing at Facebook India.

The ads will run for 10 weeks across India on a diverse number of leading national and regional television channels and digital platforms. The campaign will be seen on TV and digital OTT, including Facebook and Instagram, to provide significant reach and engagement. WhatsApp was looking for a global communication platform to talk to its two billion followers. The task was like branding oxygen. “It’s already there, we just had to give it greater meaning,” said Josy Paul, CCO and Chairman at BBDO India. He is also the Global Creative Lead for WhatsApp.

“The idea had to be truly global and yet connect locally. How do we define a place in people’s hearts for WhatsApp to live — the basis of an emotional connection that is owned and sustaining? We began with the product and WhatsApp’s privacy clicked us. Weaving communication on it can be quite liberating, it leads to greater intimacy and real human connections,” Paul said.

The brand idea “It’s between you” is a simple capture of that feeling, Paul said. It’s what led us to real human stories where intimacy liberates you in so many ways.

“The campaign endeavours to highlight that the privacy that WhatsApp provides through end-to-end encryption is not just a feature, but a feeling that leads to real human connections. We also wanted the ads to convey that physical distances don’t have to mean emotional distances as people can use WhatsApp to talk to their loved ones,” Pant said.

The brand will continue to build its upcoming communication on the real experiences of people using WhatsApp to have intimate conversations.

“These two films are a part of the larger content ecosystem that we aim to air in the coming times to engage with a variety of audience cohorts whose life is impacted positively by WhatsApp every day,” said Paul.

Throughout this year, the “It's between you” campaign will see multiple creative executions land in high-profile cultural moments across various marquee properties.

While ‘It’s Between You’ is WhatsApp’s first-ever global brand campaign, the platform had launched ‘Share Joy, Not Rumours’ in India in 2018, which was one of the largest public education campaigns on misinformation to date in India.

With an insight that privacy is not a feature, it is a feeling and state of mind, the agency tried to show the feeling of having or getting privacy in people, which builds greater intimacy that leads to real human connections.

WhatsApp is used by people across 180 countries in 60 languages and just the scale of branding something like this can be a daunting challenge, Paul said.

The added unexpected complexity was the onset of the Covid-19 global pandemic. BBDO was collaborating with teams across five countries in different time zones – from briefing to strategy to creative brainstorming.

“Unique circumstances call for unique solutions. Shot in the early days of lockdown, the production happened remotely following utmost standards of safety and precaution. This meant casting had to be done keeping in mind that the actors and the cinematographers who lived together, so no one from outside would enter the premises. And the rest of the family members became hair, make-up and costume assistants. The clients, agency and even the director supervised the shoot through a video call, just as they conducted the PPM and presentations,” Paul said. The new experience of remote shooting has been challenging and exciting in equal parts, said Indian film director Gauri Shinde. “From how to bring together the cast and crew that were right for the part and happened to be living together, and directing over a WhatsApp video call, to doing all the post-production work without being physically present, it’s been really rewarding and we are proud of what we have created,” said Shinde.

Speaking on collaborating with Shinde, Paul said, “The brand story and the scripts are around privacy that leads to intimacy, that helps strengthen real human relationships. And hence it was important to capture it authentically. Gauri is an amazingly skilled director when it comes to bringing alive real human emotions. She has an intuitive style of filmmaking and manages to extract nuanced performances by her actors that speak beyond words. She is great at telling simple stories beautifully."