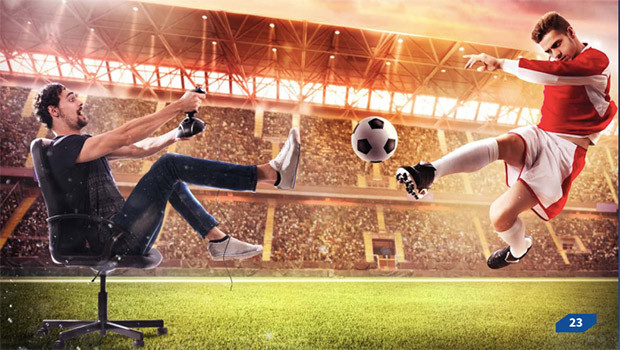 The Federation of Indian Fantasy Sports (FIFS), India’s first & only self-regulatory industry body for Fantasy Sports (FS), today unveiled the findings of a report titled ‘Business of Fantasy Sports’ in collaboration with KPMG, at its flagship event FIFS GamePlan 2020. According to the FIFS-KPMG report, OFS operators’ gross revenues stood at INR 2,400+ crore for the FY20 as compared to INR 920+ crore in FY19 an increase of almost 3X over a period of 12 months.

Every rupee of revenue earned by the Indian OFS platforms translates into revenue for its supporting industries; thereby resulting in indirect topline growth for these service providers. Indian OFS platforms are also contributing to the overall growth of the Indian economy by paying GST, TDS on winnings, through sponsorships, in attracting FDI, in executing advertising campaigns, building IT infrastructure and incremental earnings for OFS winners, among others. Furthermore, close to 50% of transactions on OFS platforms in 2019 were initiated from Tier 2 and Tier 3 cities in India, thereby promoting digital payments literacy and adoption.

The report further deep dives into the symbiotic relationship between real-life sports and fantasy sports. A dipstick survey with 750+ respondents found that for 55% of the respondents, the engagement with fantasy sports increases the consumption of real-life sports. Further, over 65% of the respondents indicated that there is a direct increase in the time spent in analyzing, watching and reading about Sports once they start participating in online fantasy sports. Besides increasing sports consumption among sports fans, fantasy sports also supports the sports ecosystem by sponsoring live-sporting events, across Cricket, Football, Basketball, Volleyball etc., by partnering with sporting personalities and giving back to sports via philanthropic initiatives. Due to the rapid growth of OFS, a new segment of the fantasy research ecosystem is also fast emerging across different digital platforms. Talking about the growth of the fantasy sports industry in India in his speech at GamePlan 2020, Amitabh Kant, CEO, NITI Aayog, said, “I have very keenly followed the growth of Indian fantasy sports industry as a supporter of technology and good governance. I am a long term believer that India must become a global champion of the fantasy sports industry. Sports across all facets, including fantasy sports, could well be a game-changer for employment and career opportunities. Given our Government’s initiatives like ‘Digital India’ and ‘Startup India’, I believe that we can harness the power of fantasy sports and create a robust sports ecosystem to boost its growth in the next few years. Post pandemic I am confident that the industry will not just rebound but will lead the way for sustainable technology-enabled growth secured by good governance.”

Commenting on the report findings, John Loffhagen, Chairman, FIFS, said, “The COVID-19 impacted the Indian OFS industry in FY21 with sports matches across the globe cancelled to ensure player & staff safety. Specific to India, with IPL getting postponed, ~30-40% of the revenues for most of the OFS operators were impacted for the quarter. As real-life sports is making a promising return, Indian sports fans are in for a non-stop sporting action for 8-9 months. As most of these matches will be held without an in-stadia audience, we are sure that fantasy sports being a highly immersive fan engagement platform will experience a strong surge in demand by the Indian sports fans.”

Girish Menon, Head of Media and Entertainment and Partner, KPMG India, further added, “Online fantasy sports in India has seen rapid growth, reaching a revenue size of INR 2,470 crore in FY20. This growth has also contributed immensely to the overall ecosystem around fantasy sports including online payment platforms, tech vendors, data analytics, etc. and has had a positive impact on the consumption and growth of the overall sports landscape in India. While COVID-19 may result in a temporary blip in the upward trajectory of the fantasy sports segment, the medium to long term growth prospects of the segment remain robust, with the gradual return of international sport. Further, in a post COVID world, with social distancing measures in place, fantasy sports is likely to play an increasingly important role in connecting fans to their favourite sports and increasing fan engagement.”

Key findings from the KPMG survey conducted among 750 respondents

- For 55% of the respondents, their engagement with sports increased once they started engaging with fantasy sports

- 32% of all fantasy sports users, engaged with more than one sport on the platform

- Over 65% of these respondents indicated that there is a direct increase in the time spent in analysing, watching and reading about the sport once they start participating on fantasy sports online

- ~15-20% of the active users on OFS platforms are paid-users, which is significant given the relatively younger vintage of the industry as compared to other digital businesses