The unique record was set on July 23 through a live stream where 119 men from different parts of the country participated for the title, “Most people washing their face online simultaneously”, with Nivea Men Acne Face Wash

Nivea Men, the complete male grooming brand, has added another feather to its cap with a virtual Guinness World Records feat. The record created was for the title, “Most people washing their face online simultaneously”, on a live stream where 119 Indian men participated with the newly launched Nivea Men Acne Face Wash.

At a time when hygiene is of paramount importance, the participants rose to the challenge and washed their face for a minute, making a new virtual Guinness World Records feat for the skincare brand. Another unique aspect of the record was that men from across the country were invited to take part in this challenge. The live online activity that had a Guinness World Records judge and select media in attendance to witness the attempt received an overwhelming response.

Men are now trying out new things while experimenting with their looks, grooming and wellness. They are no strangers to skin problems, especially acne, but believe that dealing with it involves a complicated and lengthy skin care regimen and so they do not indulge in a skincare routine. Noting this, Nivea Men decided to spread the word on how with their new Acne Face Wash, men are just one minute away from pimple free, awesome skin.

Sachin Killawala, Marketing Director, Nivea India, said, "We are excited to receive this certification from Guinness World Records. This global recognition strengthens our commitment to Nivea Men’s mission of making men’s skin care easier and quicker. This accomplishment, especially in such unprecedented times, showcases that nothing can stop us from trying to make our customers happy with the best of skincare products."

Swapnil Dangarikar, Official Adjudicator, Guinness World Records, said, "We would like to congratulate Nivea India and all the participants on this new world record achievement. We are also happy that this was Nivea India's very first world record and hope it sets a precedent for more in the future. I am happy to say, Nivea India, you are Officially Amazing.” 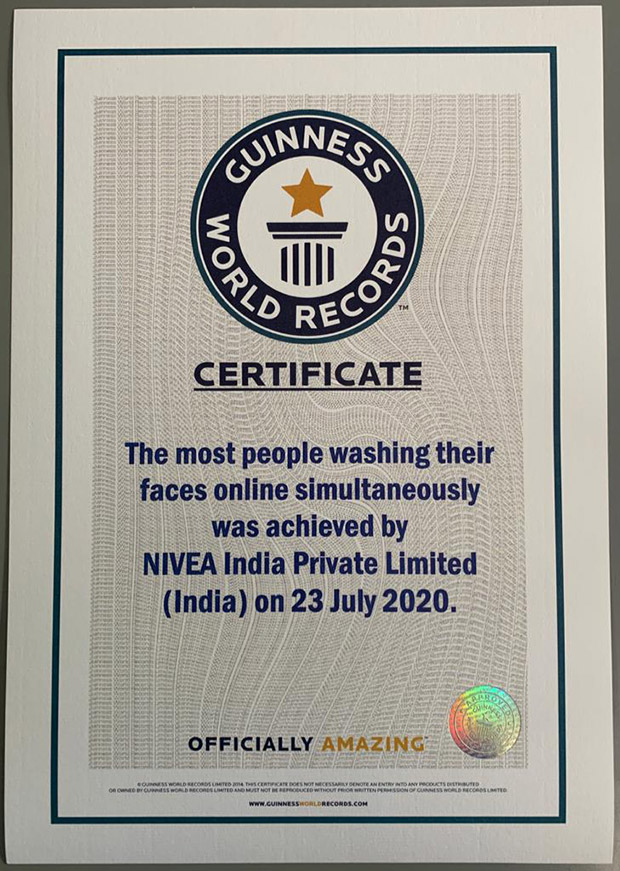