Covid-19, its economic fallout and issues raised by the Black Lives Matters debate have fundamentally realigned the ad agency businesses and the way it works. Cannes Lions Chairman Philip Thomas, in a debate with Jean Lin, Mark Read, Lorraine Twohill, David Droga and Steve Stoute sought to know what matters for clients and consumers and how purpose-led communication needs to be more factual 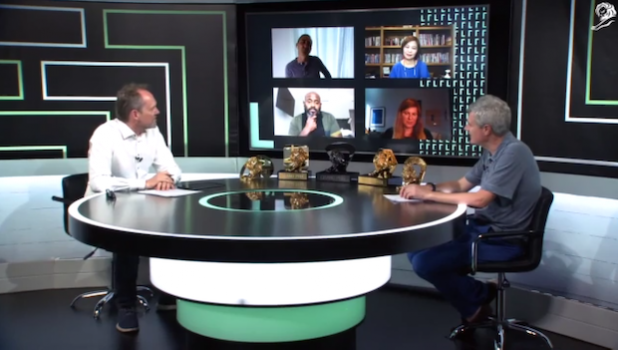 As the advertising industry — and the world — face the Covid-19 crisis and its economic fallout, Cannes Lions Chairman, Philip Thomas, on day four of Lions Live, led a debate with five industry leaders from across the globe on how our industry will emerge.

In the last few months, more or less everything has changed but how permanent will this change be for the advertising industry?

There are two schools of thoughts at the moment, began Thomas. The first is that the clients are terrified and scared at the moment to make any move, and so creativity is being shackled, and the other thought is that a crisis like this will release creativity.

Read said that creativity across the world has become harder because much thought will be given on how to communicate with people. Still, at the same time, it has never been much crucial because of the effectiveness of communication, based on the quality of the idea.

There are always some communications that are vanilla, but if you want to come through, the power of an idea is higher, says Read.

"In the short term, the crisis makes it harder but when we come out of the other side, there is going to be flourishing of creativity in many different ways this situation has put us in really," said Read.
Creativity is not under stress, believes Droga.  He said the last three months was like three years of the natural evolution of business and client confidence, and now people would try to regain their balance.

"Each client has a different level of confidence but business and expectations go on, and there is never a greater need for creativity. The reels of generic advertising are coming out at the beginning of the pandemic. I think we could have made generic videos pre-pandemic. Advertising is spoony-like and cliché, and I think the business model will be under stress and not creativity of the industry," said Droga.

Jean said creativity now is in the driver's seat. In a pandemic, we need outpouring of creativity to make things work and to reimagine all possible ways to solve a problem creatively.

Creativity is a collaborative endeavour, and there are people together in a room bouncing ideas on each other. How will be the future of the creative industry when it comes to working?

The pandemic has forced collaboration in a new way, maybe not enough between countries but between people, says Read.

Stoute said hierarchy in an agency diminished as a result of using Zoom or other collaborative tools to work. The pandemic forced people to work harder than ever before at arriving and solving a problem.
Workforces at agencies are most motivated than ever, says Stoute. He said in the crisis environment, people don't want to lose any sense of opportunity. "People are working from home are working harder than ever because they want to show their value and commitment. They are inspired to maintain and keep their role in the company,” Stoute said.

Droga is worried about young talent. He said young talent learn a lot from colleagues at work by seeing

their pattern; see and hear how other people work and make decisions.
"That is how people grow and mentor not just one-on-one but to the environment in that ecosystem, and you never get that in a Zoom call," Droga said. Zoom calls prove business and creativity can exist. In this new reality, superficial creativity is going to be next relevant, he said.

“It's more the mentorship of the young creative people that I worry but the fact that new reality– superficial creativity is going to be next relevant, it's going to put the onus much more to the substance and strategy that agencies will put out to the world. It doesn't mean all of its communication has to be heady; there is more focus on genuine creativity. Creativity is not just a feel-good thing but problem-solving," said Droga.

Twohill said WFH had brought companies closer together in so many ways and the future would be a balance. The flexibility to work from home and not allowing long commutes to the office. "Many of our young team members have long commuted from San Francisco every single day. I don't want to see a reality where we ask them to do that five days a week again proven that we don't need to," Twohill said.
Nature of creativity produced by the industry

It's fair to say production has doubled down on purpose. "It's certainly the kind of work that wins Cannes but is it a kind of work clients want agencies to put down to the world," Thomas said.

Lin said increasingly more and more agencies will be responsible for helping clients to strive in the long term. “We have to fulfil consumers need and create a positive value today but at the same time, making the world a better place. It's what consumer demands brands to do.”

"There is a linkage between the belief of what you say you are doing and what you do because now is a more connect and a transparent world and people can verify whether what you are saying and what you do are the same thing or not. Increasingly, for businesses to strive it becomes such an important element and they have to get it right to move to the next layer," said Lin.

"For me, that is the meaning of sinking purpose-driven organisation or work because it will require a lot of call to solutions in the industry. It has to be ensured that substance (presence of purpose) is there before the purpose-led work is presented to the consumer, as a consumer would want to see the link between belief and behaviour," Lin said.

Read said that brands should not show purposeful-led work, but the work that shows the company's purpose because at the end of the day, what companies do and how they behave is critically important to consumers. "I think when a company does the right thing, they earn the right to talk about it, and I think the work agencies do reflect the company's belief on what they stand for."

According to Twohill, brands should understand their sense of purpose as a company. "If you are a mission-led company then that needs to shine through your work and you need to be transparent about what your values are, what you stand for and what is your point of view and to have that has become important more than ever."

Droga says anyone who is trying to do good in the world is better than the ones who are not working, but if you are saying something that you are not, it's going to be worst for you.

The brands that were true to what they were and cared about what they did with their powers and their scale are the ones that are flourishing now even more because people know who they are. "We just try to stay true and authentic, and that's the good thing for now," said Droga.

One great thing this pandemic has exposed is that a lot of consumers say if a brand is not adding value beyond its product and service, they don't want to hear about how much the brand care about them, Droga said.

On diversity, Stoute said every brand and agency needs an African-American strategy based on society notifications, and it has to be measurable and published. "It's the first and foremost thing expected".

Stoute said the holding agencies have failed to do this and they have to start now. "Brands that incentivise agencies to do good communication need to hold them accountable for hiring."

Read said WPP has been well-intentioned, but it's a mistake not to keep this topic in focus. "I think we have not done enough as an industry and WPP needs to set targets, hold ourselves accountable, and make sure that it's not an HR initiative."

Is the advertising industry institutionally racist?

The challenges of representation and equality thrown in the spotlight by the recent Black Lives Matter protests raised questions on the thinking of brands and agencies.

Stoute said the whole idea of Chief Diversity Officer, specifically in this industry, has failed as no one who is talented needs a side door.

He says the industry is not racist but extremely biased. "I was one of the guys who was said, hey let's put a 49%-51% partnership so that we can stand up this black agency and get government contracts or we can go win an automobile piece of business that's going to go to our minority. It's not a concern, but convenience to keep account and get more money, not a concern for real problems. I have seen that in this industry over and over again."

He believes the industry has the opportunity, responsibility and privilege to drive change. "As an advertising industry, we are on the job of directing change, and we know this is bad and needs to change."