Vice & Versa is a series of online debate on current topics in the ad and media industry. The first session had Josy Paul of BBDO, Santosh Desai of Future Brands and Agnello Dias discussing how brands claim to be purposeful without understanding the true meaning of it 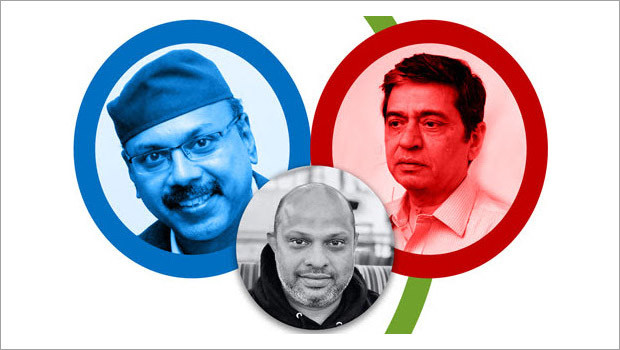 With points and counterpoints, arguments and challenges, beliefs and opinions and uncanny ability to juice productivity out of every disagreement, Vice & Versa is hoping to harness diverse opinion in a series of constructive and thoughtfully created debates.

The first session held on June 20 was on the topic "Brand purpose, responsible or opportunistic?" Agnello Dias, Creative Chairman of DAN, was the moderator and Josy Paul, Chairman and CCO at BBDO India and Santosh Desai, CEO at Future Brands, were panellists who argued on the topic.

The series will focus on topics discussed for a while in the A&M industry. Ad Club's events would be internet-based for the next few months to avoid physical gathering. Like V&V, there will be more such initiatives. TAC will bring out courses and academic programmes this year, which will help upskill the industry’s mid to senior-level people.

Dias started the debate by saying that ad agencies manufacture a product whose evaluation is subjective. It is subjective because it depends upon who is evaluating the product; if it is good or bad. People could say that it can get evaluated through sales, but that does not happen only through sales, Dias said.

Dias said for decades, the advertising and marketing community in India needed and marinated the world's most extensive collection of emotional pulse points into an economy that keeps resurging in the face of all adversity.

On the one hand, the panel had a school of thought that says it's about time brands pay dues to the society that builds them and stand for something that can change consumers’ lives and not only their habits.

Sell fewer products, save the world more. Brands have to stand for a cause, not a benefit. It's no longer how they can change a young man's commute to work or life or the future; it's about fighting humanity.

On the other hand, the school of thoughts says the brand purpose is a new award pandemic. Take a heart-wrenching cause, create a clever product variant or hashtag, put a heart and soul into the case study video and pick up the trophy.

Paul started by mentioning a few of the purpose-driven campaigns of the early 2000s that helped the client to sell. "All these campaign ideas came from the product offering within what the brand was trying to solve."

Paul said in 2005, Dove released an ad for real beauty, which challenged and asked people to re-define the definition of beauty. It was all coming from the purpose.

He gave Surf Excel's 'Daag Ache Hain' as another example of it. "These were brands that are standing for something. It makes a brand simply recognisable and tapped into a new source of energy in business communication," said Paul.

Paul mentioned campaigns that have action with a purpose, which raised the bar for brands. The Share the Load and Touch the Pickle campaigns were some of those.

According to him, the unique selling proposition is giving a unique point of view. USP is way to UPV. The nature of media is getting fragmented, and brands have to stand for a cause and create action and cause, and action becomes the glue that brings fragmented media together. "It creates followers, ambassadors, volunteers and partners," Paul said.

But isn't it the lowest form of selling when a brand does anything to try and sell the product? If they are manipulating what people perceive as a genuine social cause and doing it to increase sales of a product?

Real brand purpose is personal; it all depends on where you are coming from, says Paul. People can sense who is standing true to the purpose and who is faking.

Brand purpose is a good thing, the problem in my view is the fact they are asserting. Their primary reason for existence is to do better for humanity and the world, says Desai.

The kind of articulation that we come across is "we get out to beg to do this," "it is the passion that drives us beyond profits". What is being presented to the world is the idea that brands have this incredible vision of the world, and that is its primary driver and the reason for existence, said Desai.

"It sits above everything else; ‘the primary purpose’. It reminds me of an era where we had super false claims on products, dodgy claims with aesthetics. To my mind, it's equivalent to those dodgy over-claims where you take a kernel of truth, a token of activity that you are engaging in, a little act that you perform and blow it up as being a central purpose of existence. To me, this is nothing but a dishonest exaggeration," Desai said.

Brands now are presenting themselves, saving the world in a variety of ways. Why now? Because there is a belief that the younger generation that values this is looking beyond consumption.

"Brands ask to be bought not for any other reason but because their heart beats for everyone they are catering to, and to my mind, this way of looking at brand purpose is hypocritical and opportunistic. It can be banal and boring, the whole sense of sameness that pervades all this kind of communication that we see."

He said that being called as purposeful is an extreme form of virtual token signalling, and eventually, this will not hold because this is not the truth. Brands do not exist for this reason. It's a posture and dangerous for society.

Desai said there is a handful of brands with purpose that have created policies way ahead of time and spent money without thinking of their profit. The Tatas are one of them; they are doing it from decades.

He said for the vast bulk of brands, brand purpose is something that they discovered late and tagged on them to be relevant today in a changing consumer space. A lot of these brands are doing the exact opposite of what they have done for decades. These are the brands that have dismantled the self-esteem of a woman.

"They have encouraged rampant overconsumption, reinforced all kinds of stereotypes, made fun of all human vulnerabilities, but now suddenly these are the paragons of virtue, lecturing consumers to share the load, having suddenly discovered these noble sides," said Desai.

"How can Dove and Fair and Lovely come from the same stable? How can the brand explain?" pointed out Desai.

Gillette for years created a particular archetype of masculinity.

Desai said that the company that talks about ‘share the load’ was ranked among seven worst employers in terms of pregnancy leave policies. "They could start by sharing the load of their employees."

According to Desai, if a brand truly believes in something, it has to be measured on itself first.

"There have been no such meetings at organisations which have called for a meeting on raising women's self-esteem enough," said Desai.

Desai further gave an example of Unilever on how it can improve its brand purpose.

"If Unilever, which is making a very well-intended effort to move towards purpose, talks about making common people's lives sustainable, it can begin by setting its goals of reducing consumption. On the other hand, the case it makes for brand purpose is the fact that brands that were part of their sustainable living package grew 69% faster than others. But how does this fit with creating sustainable living with active goals of promoting unsustainable consumption?" said Desai.

Desai said one can talk about purpose. However, purpose will be allowed until the time it is delivering results. The day it stops giving results, all the strong beliefs will fall apart because at that time brands and agencies will switch gears and start doing something else.

Before making self-important claims about the world, the organisations could begin with something much more real and basic.

# Look after your employees' lives

# Don't sack people whenever there is a downturn

# No false claims in advertising

Desai said it's a question of overextending and making claims that are not sustainable. It is dishonesty and puffery and needed to be called out.

"Brand purpose right now is a mask; it is vastly inflated claims made by brands. And who are we kidding when we profess that we are here to save the world? We need to think beyond that. Every time the awards kind of thing scavenges the misery of others, to my mind, that should be distressing to anybody to have to experience it," said Desai.

Should brands revamp purpose or don't do anything at all?

Desai said brands should not claim purpose and use it as their marketing peg. "What is the need to go on a pedestal and lecture to others, central premise to whatever you are saying? Brands should be more purposeful, and there should be a fundamental difference in a way that they see their interaction in society."

According to Desai, brands that claiming purpose will be asked the kind of questions they weren't otherwise merely because they are professing and claiming something that they cannot deliver.

The panel discussed how advertising was always opportunistic and that one looks for pegs that allow them to establish some sort of a relationship with the consumer.

Ad agencies had creative fads in the past. There was a time when jingles and humour were huge but never before the entire industry was following the purposeful path.

The effect of this is that it is giving big brands a voice in areas they did not have a view and voice.

"When a brand sows a seed, they have to live it. I have seen how cultures have changed because somebody has sowed a seed in that company. For me that gives hope," Josy said.

Josy said it is early days of wanting to jump into the same sort of the gravy train, but it won't work for everyone. The truth will live and the right guys who live it will shine.

Communicating or creating a product?

Josy said if a product has real differentiation, it will get quickly leveraged. A lot of start-ups have a new point of view with a new product, in which case you don't have to do all this. There are products that have no point of differentiation and the unique selling proposition does not exist. We go to a unique point of view and often that tends to translate into something more profound and relate it to where people and society are coming from, Josy said.