Sakal Times ceases its operations today. Gomantak Times will stop operating after June 1. The media company is completely wiping off the two titles and there are no plans to continue with their respective digital editions as of now 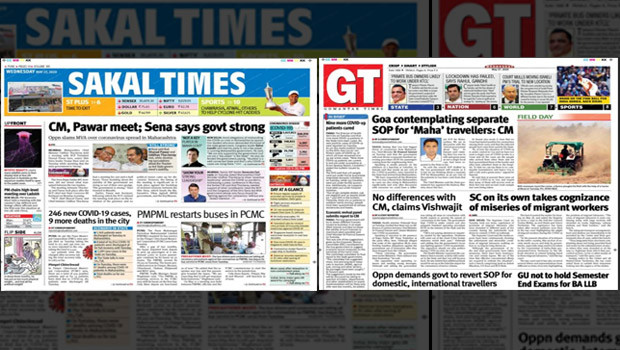 Both newspapers had one edition each, as the other editions were gradually closed in the past couple of years.

The media company is completely wiping off the two titles, and as of now there are no plans to continue with their respective digital editions.

Nearly 45 of the editorial staff from both papers will be laid off, along with a lot of employees from marketing and other verticals. The two papers were sharing a lot of resources with their respective Marathi counterparts, Daily Sakal and Daily Gomantak. The employees were taking a salary cut since March 2020 when the lockdown started.

It has been a tough time for the print industry and the news comes on a day when HT Media laid off over 100 staff.

In Maharashtra, Marathi daily Sakal is still showing growth, standing at No. 2.

Gomantak Times was launched in Goa around 1986, while Gomantak was launched by 1962, by The House of Chowgules. In 2000, Sakal Papers took over the two papers as the former abruptly shut down its media businesses. Gomantak Times has witnessed leadership positions in the Goa market in the past.

Sakal Times started circulation in 2008. The newspaper was first known as Poona Herald and was revamped as Maharashtra Herald.