The key findings of the extensive poll revealed that 76.8% of the 250 surveyed CEOs want a calibrated lockdown exit plan, with 54.4% expecting businesses to return to normal in six months to a year 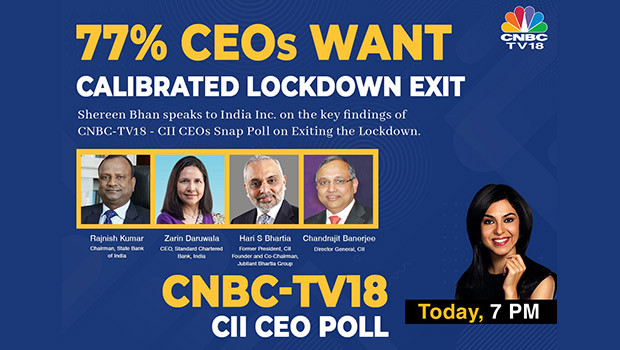 With the nationwide lockdown extending by two weeks, CNBC-TV18, the English business news channel, in association with CII, conducted the CNBCTV18-CII CEO Poll that surveyed 250 of the country’s leading CEOs. The extensive survey provided a clear picture regarding multiple areas that concern the Indian economy and business operations at large.

Hosted by Shereen Bhan, Managing Editor, CNBC-TV18, the show, broadcast on May 1, saw her along with four industry bigwigs discuss the findings of the poll and present their opinion and key analysis. The special show featured the likes of Rajnish Kumar, Chairman, State Bank of India; Zarin Daruwala, CEO, Standard Chartered Bank, India; Hari S Bhartia, Former President, CII, Founder and Co-Chairman, Jubilant Bhartia Group and Chandrajit Banerjee, Director General, CII offering their views on the significant discoveries of the poll, and commenting on the challenges and opportunities that lie ahead for the nation.

The comprehensive survey encompassed 15 questions asked to 250 CEOs across various sectors. The findings revealed that 76.8% of head honchos felt that it is time to move to a calibrated exit from the national lockdown whereas 85.9% believed that a graded exit will be beneficial. Even as several companies have started laying off their staff and imposed salary cuts, 71.2% still say layoffs are not imminent in their organisations, but 34.1% leaning towards looming wage cuts.

Asked when businesses will return to normal, 54.4% said they expected operations to return to normal by anywhere between six months to a year, while 29.2% said it could take more than a year. While 33.5% felt that the recovery will look convoluted, 28.6% said it will recover with a positive trajectory. 25% expected a very minimum recovery. Overall, one of the major findings of the poll indicated that about 50.6% of India’s CEOs expect their company’s top line to fall by more than 25% in this FY.

The show, featuring eminent experts that have helped decode the key findings of this poll, has served the purpose of informing viewers of the current market scenario, the lessons learnt and what the future has in store of the Indian economy.