MTV bolsters its programming amidst lockdown with originals

Starting May 2, every Saturday and Sunday, the channel brings an innovative twist to its flagship properties with MTV Roadies LIVE Audition, MTV Hustle From Home and MTV Ace Quarantine 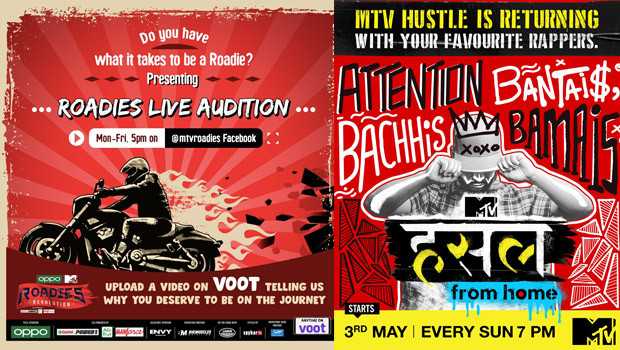 Over a month into the lockdown, social distancing has become a way of life across the country. As the youth are adhering to the lockdown way of life, they are consuming more content and are craving for fresh shows on television and digital media to keep themselves entertained. Understanding this need gap, MTV has found its way to make lockdown weekends more entertaining with power-packed original content.

Starting May 2, every Saturday and Sunday, MTV brings an innovative twist to its flagship properties with MTV Roadies LIVE Audition, MTV Hustle From Home and MTV Ace Quarantine. Amidst a lockdown on shoots, these shows have been created innovatively to build interactivity and amp up the entertainment quotient.

Commenting on MTV’s innovative content line-up, Ferzad Palia, Head- Voot Select, Youth, Music & English Entertainment, Viacom18, said, “MTV is the leader when it comes to original concepts for youth entertainment. Amidst the lockdown, we adapted quickly to keep our viewers connected with their favourite stars on social media. The success of these initiatives prompted us to explore digitally shot unscripted content for TV as well, thus giving rise to properties like MTV Roadies LIVE Audition, MTV Hustle from Home, and MTV Ace Quarantine. Keeping in line with the viewing preferences of our young audience, this fresh programming every weekend is an effort to create an engaging television experience for our fans and bridge the gap for new content on TV.”

Roadies auditions are thrilling. More so, when it’s done virtually. In its 17th season, India’s longest-running adventure reality show has created history with the first-ever LIVE auditions on social media. Post levels of challenges and interview rounds on the Facebook page of MTV Roadies, one deserving contestant will win the ultimate opportunity to battle it out on the final journey. Some of the best moments of OPPO MTV Roadies Revolution co- powered by Castrol POWER1, Alo Fruit Juice, and Manforce, will be aired on the channel as an episode every Saturday starting May 2 at 7 PM.

MTV Hustle from Home is a unique 6-part series where the best from the world of rap will come together to jam from their homes. Starting May 3, every Sunday at 7 PM only on MTV, this series will bring the best of hip-hop for the audience and offer a musical treat. Stalwarts Raftaar and Raja Kumari will join in the show to share their insights on writing, composing the right beat, and arranging a song. Hosted by VJ Gaelyn Mendonca, the series will also see popular artists of MTV Hustle S1 such as M Zee Bella, RCR, EPR, Agsy, Void, & Shloka indulge in a fun rhythmic banters and create an upbeat musical experience. This series is MTV’s heartfelt salute to all superheroes- doctors, nurses, police, and other essential service providers, who are at the forefront, battling these trying times.

Adding up to the quirk and drama, MTV Ace Quarantine, which will launch next month will encourage participation from around the country. The contestants will be given tasks that will revolve around how they’re ‘acing the quarantine’ at home. Hosted by MTV Ace of Space fame Varun Sood and Divya Agarwal, the tasks will be open to public for voting. The most entertaining contestant will be titled as the winner and gratified by MTV.