How Kia rewinds its old TVC to become timely, relevant and to the point in the times of Covid-19

Isobar India re-crafts an earlier commercial to show the protagonist, who readies to go on a date, heading back to his home to convey the message about staying back home to beat the Covid-19 pandemic 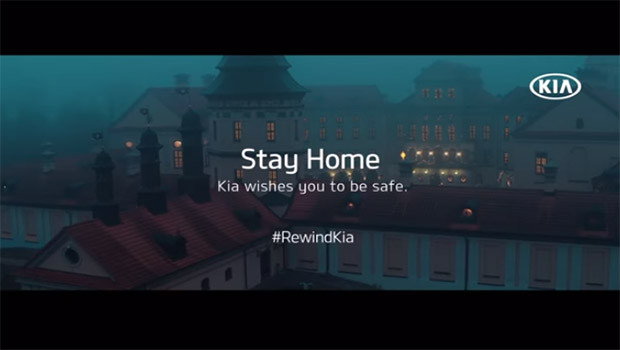 As the Covid-19 pandemic cripples the world, staying at home has become the most effective way to contain the coronavirus. To raise awareness about it, car brand Kia Motors in its #RewindKia campaign have reversed the flow of storytelling — rewinding backwards from outdoors to indoors, which typically in a car commercial begins indoors and moves outdoors as we approach the climax.

The campaign crafted by Isobar India shows Mr Brown, the protagonist in the Kia Carnival commercials, who leaves his house to go on a date.  The agency reversed the TVC, taking Mr Brown back to his home to convey the message about staying back home, as it is the most effective way to combat the deadly pandemic.

“This simple concept communicates the paramount importance of staying home in a Kia trademark lively tone. At the same time it hinges on our last communication which makes it more noticeable and memorable. When the world is reeling under pressure of the tough times of the pandemic, Kia urges consumers at-large to ‘Stay Home and Stay Safe’ and ruminate their golden memories. We have always focused on doing the basic right and keeping it simple. With the #RewindKia, our intent is to urge people to look for the silver lining by rewinding to things that keep their spirits high and positive,” said Manohar Bhat, Vice President, Head of Marketing -Sales Kia Motors India.

The brand wanted to come up with a digital media campaign across platforms that encourage people to hold on to hope and stay positive. The campaign has already garnered about 62 million impressions followed by 14 million reach and, 18.2 million views. The numbers are cumulative of all social media platforms as of 15th April’20.

“The biggest challenge was to produce a video amid the lockdown. So we went back to see if we could create anything using the existing assets. We hit the jackpot when we realised that Mr Brown, our protagonist in the Kia Carnival commercial, leaves his house to go on a date in the TVC. So, we reversed the TVC to bring Mr Brown back to his home to convey the message in a simple yet effective way. This way, we had the perfect video to kick-start the campaign,” said Anadi Sah, Executive Creative Director, Isobar India., Executive Creative Director, Isobar India.

According to industry experts, the campaign deserves to get a double thumbs-up as it is timely, relevant and to the point. “It is timely. I think it makes sense to give a message that is specific to Covid-19 and yet integrate a brand in a meaningful form,” said Khushboo Solanki Sharma, Founder of Zero Gravity Communications.

To give a positive spin and engage with consumers, the agency (Isobar) urged them to constantly look for a silver lining and rewind to things that keep their spirits high, using #RewindKia across social platforms.

“I think this film has set an example of how to rehash existing content to make it more relevant to a current scenario,” says Kartik Shinde, Associate Creative Director of Tonic Worldwide.

“The reverse time-lapse treatment isn't anything new but in this context, it has done the job of sending the right message to the audience, 'Let's all just rewind and stay home,” he said.

Kia Motors aims to keep spreading positivity through its future communications around the pandemic. According to Samit Sinha, Founder, MP of Alchemist Brand Consulting, the campaign breaks the clutter of car advertising in general. It is stylishly executed and manages to feature the product (the car) in almost every frame of the film, ending with a message that is very topical and yet comes as a surprise. “In doing this, the advertisement manages to cleverly stay true to its brand theme of The Power to Surprise while weaving it into the current global narrative,” he said.

Though the most important objective of the campaign remains spreading positivity, the secondary objectives can be enhanced positive sentiments and conversation around the brand and to increase brand love.

But why did the agency chose Kia’s Carnival campaign and not any other? That’s simply because the Extravagant by Design campaign for Kia Carnival was the latest work from the brand, which was released just a few days before the outbreak. So it was more likely to be fresh in the memory of people and enjoy a better top-of-the-mind-recall.

In addition to this, the campaign showcased Mr Brown as an extravagant personality. So, it also helped the brand and the agency to establish that even the most extravagant ones are choosing to stay back at home.