The country witnessed the magnificence of the viewership of Ramayan as the magnum opus made a comeback on Doordarshan after 32 years. With India entering the third week of the 21-day lockdown, BestMediaInfo.com takes a look at how GECs have now creatively lined up slots to entertain audiences backing on ‘nostalgia’ 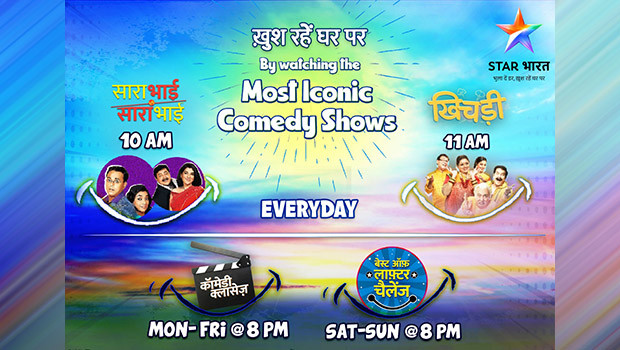 Ever since the production of TV shows, web series and movies was halted due to the Covid-19 outbreak, GECs are fuelling the ‘nostalgia’ factor of viewers by airing reruns of popular shows. The country witnessed the magnificence of the viewership of Ramayan as the magnum opus made a comeback on Doordarshan after 32 years.

A few have also taken their digital content to television to retain audiences.

Colors is airing mythological shows ‘Mahakali’ and ‘Ram Siya Ke Luv Khush’ between 4pm and 6 pm. The slot between 7-11 pm brings shows such as Choti Sarrdaarni, Shakti... Astitva Ke Ehsaas Kii and Barrister Babu to the audience. This slot also includes the popular reality show Bigg Boss’ latest season. The channel is also airing popular seasons of ‘Khatron Ke Khiladi’ in mornings and for weekends, it is providing a dose of laughter with ‘Comedy Nights with Kapil’ along with Naagin.

Manisha Sharma, Chief Content Officer, Hindi Mass Entertainment, Viacom18, said, “Due to the nationwide lockdown, the television landscape is changing quite significantly. We at Colors are constantly and very closely evaluating how the viewership habits are evolving and designing our programming,” she said.

“With no fresh daily or weekly shows being put on air, viewers are looking at alternative options for entertainment and non-prime time bands have gained momentum. People staying indoors and spending time with the families has boost movie consumption on TV and hence we have consciously added it to the mix along with mythology. Through challenging times, Colors continues to stay connected with its loyal viewers through a carefully curated mix of shows for wholesome entertainment,” she added.

Star Plus has strengthened its line-up by getting a number of mythological shows on air. ‘Mahabharat’, ‘Siya Ke Ram’ and ‘RadhaKrishn’ are in the evening between 6 pm and 7:30 pm. Meanwhile, reruns of the popular show ‘Kasautii Zindagi Kay’ is being aired at 8 pm. The slot between 8:30 pm and 10 pm is filled with ‘Yeh hai Chahatein’, ‘Maharaj ki Jai Ho’, ‘Ye Rishta Kya Kehlata Hai’ and ‘Ye Rishtey Hai Pyar Ke’. The late-night slot between 10:30 and 11 pm include the show ‘Ye hai Chahatien’ and ‘Nazar 2’.

An official from the channel said, “The entire country is going through a difficult time with all of us stationed at our residences to ensure social distancing. Star Plus has always been at the forefront while delivering quality content and even in such a dire situation we have launched a variety of shows for viewers. A unique sci-fi comedy ‘Maharaj Ki Jai Ho’, a beautiful mythological story of Radha & Krishna and a suspense thriller ‘Hostages’. We will also showcase world television premieres of latest Bollywood flicks for wholesome family entertainment."

Star Bharat has brought back iconic comedy shows to make the audiences laugh. ‘Sarabhai vs Sarabhai’ and ‘Khichdi’ will air at 10 am and at 11 am every day. ‘Comedy Classes’ will be aired on weekdays at 8 pm. The channel will also air popular episodes of Laughter Challenge on weekends at 8 pm.

Star Bharat has also changed its identity in the time of crisis. They have also introduced a campaign that promotes social distancing. The original idea had an inspiring story of a boy fearlessly marching forward towards a crowd to overcome fear and join a movement. The new campaign is played in reverse to promote social distancing.

A spokesperson of Star Bharat said, “The pandemic outbreak has led to millions staying home and glued to their television screens and phones for entertainment. And in such times of anxiety and distress, the channel introduces joy in the life of its viewers with a daily dose of entertainment and learning through engaging content on Star Bharat. We aim to provide audiences with positive content, which makes this quarantine period less stressful and creates an optimistic environment, showcasing comedy and mythological shows.”

Zee TV has extended its on-demand nostalgia band from 2 pm to 6 pm, featuring loved shows like Jamai Raja, Choti Bahu, Pavitra Rishta, Jodha Akbar and Zindagi ki Mehek among others. The channel has also brought three of its web series on television. Popular web series ‘Karr Le Tu Bhi Mohabbat’ and ‘Baarish’ are being aired at 9 pm and at 10 pm. ‘Kehne ko Humsafar Hai’ is scheduled at 10:30 pm on weekdays.

The channel is also airing reruns of popular shows ‘Kumkum Bhagya and Kundali Bhagya’ from 7 pm to 9 pm on weekdays. Iconic Zee shows like ‘Kasam Se’ and ‘Brahmarakshas’ also made a comeback and are airing at 2 pm and 5 pm, respectively. For weekends, the channel is airing episodes of popular reality show SaReGaMaPa Lil Champs.

Sony TV has brought back mythological shows ‘Mere Sai’ and ‘Vighnaharta Ganesh’ between 7 pm-8 pm. It is airing episodes of popular shows ‘Ek Duje Ke Vaaste’, ‘Mere Dad ki Dulhan’ and ‘Un Dino ki Baat hai’ between 9:30 pm and 10:30 pm. For weekends, the channel has brought back popular episodes of ‘Super Dancer’ at 8:30. ‘The Kapil Sharma Show’ is aired at 9:30 pm. Crime Patrol Satark is airing at 11 pm, while horror show ‘Aahat’ will be aired at 12 am.