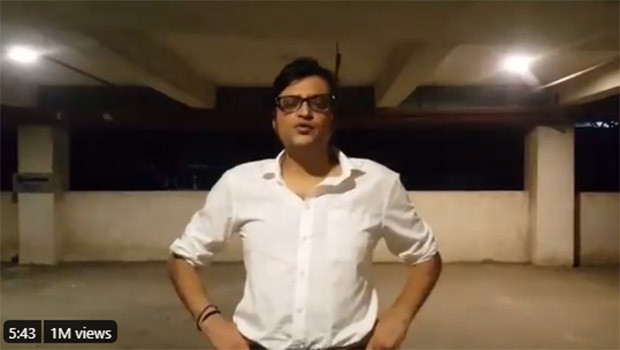 Republic Media Network's Editor-in-Chief Arnab Goswami was attacked on his way back home from Republic's studios in Mumbai at quarter-past-midnight on Wednesday.

In a video statement after the incident took place, Goswami alleged that the physical attack was carried out by Congress goons, who he said confessed to having been sent by the party’s higher-ups.

The attack came after a tweet put out by Congress leader Alka Lamba threatening that "Congress leaders will have to come out on the roads if action is not taken against Arnab Goswami."

The News Broadcasters Federation (NBF) has also condemned the attack on Goswami but refrained from taking the Congress’ name.

"The News Broadcasters Federation is concerned and shocked by the recent attempt to attack Arnab Goswami, Managing Director and Editor-in-Chief of Republic TV, and his wife, by a section of a particular political party in Mumbai, while they were driving back home from work,” it said in a statement.

"The NBF notes that it is deplorable to know that the alleged political party, which claims to stand for Freedom of Expression, has resorted to personal attacks, including the filing of FIRs in various states across the country, against Arnab Goswami, for performing his professional duty as a journalist.

“Journalists are professionals and reflect the views and sentiments of the larger people. Instead of engaging in a democratic debate, such incidents of harassment and attempt to physically attack the individual is shocking and highly condemnable," it further added.

"The attack on Arnab Goswami, Editor-in-Chief and Managing Director of Republic TV, will not be taken lightly.  We stand by Arnab and will do whatever required in this fight. Attack on media will not be tolerated," said Sanjive Narain, Founder, Prag News (Assam).

"It is very shocking," said Sreekantan Nair, Managing Director, Twentyfour News. "We strongly protest against the incident and request the police to take immediate action to arrest the culprits."

"We at ITV network condemn this cowardly act of violence against Arnab Goswami and his family. In today’s India this is unacceptable and must be condemned by all," said Kartikeya Sharma, Promoter, ITV Network.

"It’s a disgrace, shame and utterly rubbish for someone to attack on Arnab and his wife. Such a cowardly act is deeply condemnable and shouldn’t be taken so easily. This is the price a journalist gets for raising relevant questions. It’s a shame. NBF and its members wouldn’t hesitate to go on a protest if the perpetrators are not brought to light soon,” said Shankar Bala, CEO, Fourth Dimension.