This year, brands have crafted beautiful campaigns not just for the sake of it but also with strong messages. Here are a few of them that stood out 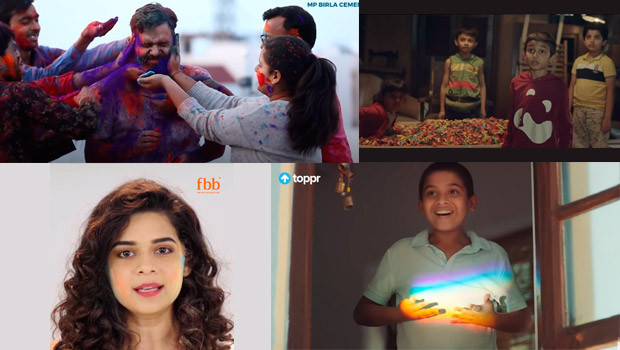 Holi, the festival of colours, is a day when the whole country is painted as vibrant as the rainbow and every home is abuzz with friends and visitors. To celebrate the occasion, brands this year have come up with not only colourful campaigns but also ones with strong messages.

Be it Livpure’s message not to waste water during Holi, fbb voicing a strong point of view to stand up against bad-touch many women experience during the festival or Toppr’s cheerful campaign for those little ones who always have exams during this time, brands have come up with different messages and initiatives.

India loves celebrating its festivals, especially Holi. But there’s a cost to these celebrations — massive wastage of water. Livpure aims to put an end to this wasteful aspect of one of the most loved festivals of India. Their new Holi campaign #BinaPaaniHoliManani seeks to create awareness around the rampant use of water balloons, which contributes greatly to the water wastage during Holi. The digital film uses kids, who face the major brunt of this problem, to make a statement against using water balloons. The campaign is conceived and conceptualised by Famous Innovations.

fbb is voicing a strong point of view on the occasion of Holi to stand up against bad touch many women experience during this festival. Fbb, the fashion hub, deep-dives into both these occasions and creates a campaign to promote an enjoyable and safe Holi for women.

Voicing out every women’s opinion, fbb has created a film featuring Mithila Palkar narrating the inner feeling of all women. The campaign urges men and women join hands with Mithila and create awareness to ensure that women are respected and made them feel safe in all circumstances. fbb is also giving out stickers at the stores to all its customers to help create more awareness about this initiative.

#BuraNaKhelo campaign will be amplified on digital media platforms of fbb with social media influencers such as Sayaani Gupta, Manav Chhabra, Awez Darbar, Shriya Pilgaonkar and over 20 personalities.

Holi is a celebration of brotherhood, forgiveness, new beginning and the love we feel for the people in our lives. These emotions and relationships are what make a home and instil in them stability, strength, integrity and love. MP Birla Cement has come up with a four-minute film on the occasion.

Based on a beautiful poem by radio presenter Neelesh Mishra who narrates a spouse’s longing for the presence of the significant other; the film pays allegorical homage to the love and longing that Krishna bore for Radha. The narrative is at once playful and passionate, describing the many festivities that the celebration of Holi entails, interspersed with the yearning of a wife to see her returning husband. Filled with several realistic interactions that are typical to Holi, the underlying message comes through subtly but surely—just as the gulaal colours our clothes and faces, it is the dear ones who colour our lives. Every individual in our families and circles adds a different hue to our journeys, some dark and some light, but it is these relationships that build us and make us who we are.

Learning app Toppr has come up with a campaign with the theme, what do you do when exam preparations get in the way of Holi celebrations? It shows a child stuck at home as he has exams the next day, while his friends are playing Holi outside. He goes to the window when his friends cheer him up by showing him a mirror and a diamond like glass piece and multiple colours reflects on his dress. With the message, you find a way to spread the cheer like a Toppr.

Uniting colours with love, fashion brand Max Fashion has introduced a Holi campaign, ‘Holi Apno Wali’. The concept of the film spins around how the colours of Max bring people together during Holi, irrespective of whether they like playing with colours or not.

Capturing the affectionate moments between siblings, the campaign revolves around a family of five rejoicing in the celebrations of Holi. The film focuses on the youngest member of the family who is running away from his sisters with a fear of getting coloured. A colourful twist is added to their playful bond when the sisters gift their brother trendy outfits instead of soaking him in multi-colours. Through this film, Max celebrates the true spirit of Holi by celebrating togetherness and spreading happiness with their stance — #HoliApnoWali

The film has been conceptualised by Lighstream, the branded content studio owned by Rainshine Entertainment.

Adding a splash of fun to the colourful festival of Holi, beverage company Coca-Cola India has unveiled a new campaign ‘Khelo Fanta Wali #NoBahanaHoli for its orange sparkling beverage — Fanta. The campaign in a playful manner reiterates the brand’s core promise of being the best companion for uninhibited playful fun this Holi.

The campaign reinforces how Fanta’s bold orangey taste helps teens to unlock their playful self, enabling them to shed their inhibitions. Teens today seem to face a lot of peer pressure and as a result go through painstaking effort to protect their curated personas, which can get in the way of maximising their enjoyment during festivals like Holi. Fanta reminds teens that it’s okay to let fun just be fun and that there is nothing wrong in just enjoying the moment to the fullest. In the two videos, Fanta’s brand ambassador Sara Ali Khan invites teens to shed their excuses and play their #NoBahanaHoli.

In addition to the digital and on-ground, the campaign will be supported by a Fanta #NoBahanaHoli selfie/video challenge through radio and digital platforms.

IndianOil’s new digital topical film ‘RangAnekPehchaanEk’ on the occasion of Holi, commissioned by Madison Communications, conceptualised by Digi Osmosis, brings out a unique perspective, showcasing how every colour is identified with a tradition or ritual of the rich Indian culture but when these different colours blend together they represent India as a whole.

The campaign film depicts how in a country as culturally diverse as India, it is the simple expressions of colour that holds together a multitude of outlooks and traditions. When the colours blend together it is difficult to differentiate; metaphorically communicating the message to people that let us come together just like the colours and be identified as Indians first.

Tags: Spread the joy of colours Holi responsibility
Advertisment
More from this section