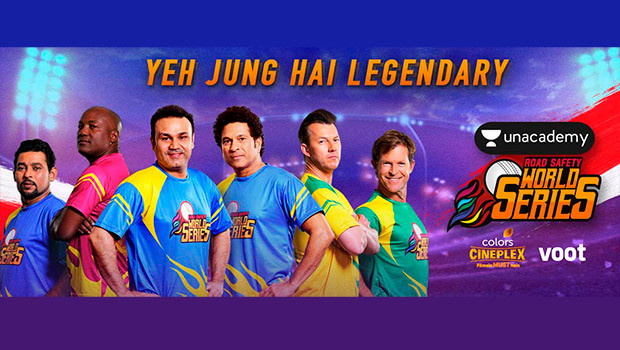 In the interest of public safety and security, the organising body of the Unacademy Road Safety World Series — the Professional Management Group (PMG), Viacom18 Media Pvt Ltd, BookMyShow, DNA Entertainment and Majestic Legends Sports have unanimously agreed to reschedule the remaining matches of the Series to a later date following the advisory issued by Ministry of Health and Family Welfare, Government of India. The remaining seven matches in the series will now be played when the situation is conducive to hold public events with large gathering and there are no travel restrictions.

In another development, Zee Group said, "As a measure of precaution on account of the continuing concern over the COVID-19, the ceremony for Zee’s annual film awards property - Zee Cine Awards 2020 stands cancelled for general public to avoid mass gatherings. Instead, the awards will now only be shot as a televised show. We would like to assure the fans who had purchased tickets for the event through our associates and partners that they will be refunded at the earliest. Our viewers and fans can now look forward to catching their favourite Bollywood celebrities during the telecast on March 28, 7.30 PM onwards on Zee TV and Zee Cinema. Additionally, viewers can also catch these awards before TV on Zee5."

Due to the outbreak of COVID-19 and the escalating number of cases worldwide, the Government of India issued an advisory “to ensure that no public gatherings take place in any sporting event”.

The first four matches in the Road Safety World Series saw a tremendous turnout at all venues and huge following and engagement on air and the digital channels. The popularity of this five-nation T20 series, which is held to create awareness towards road safety in the country, grew with every passing day and tickets for the upcoming matches were sold-out much in advance. To prevent any further scope of a large gathering, the organisers felt that it is apt not to go ahead with the planned matches now.

Talking about the series, Ravi Gaikwad, RTO Chief of Thane (Konkan Range), said, “The decision to reschedule the event has been taken as the most responsible course of action, to safeguard the health and safety of the cricket-loving fans, players and staffs. The Government of India (GoI) has issued an advisory to ensure that no public gathering takes place in any sporting events and so it is important that we obey the government guidelines and hence this slight break in the tournament, but it will be back soon for the cause of road safety.”

Rohan Lavsi, Head, Colors Cineplex, Viacom18, the official broadcast partner of the series, said, “Whilst the first few matches began to a great start, ensuring the safety of our attendees, players and stakeholders comes first. The unfolding of COVID-19 has significantly affected the industry at large and assessing the health risks and in line with the government guidelines, we have decided to postpone the Road Safety World Series matches.  We appreciate the enthusiasm and support everyone has extended to the league and will announce the future dates soon.”

Melroy D’Souza, CEO of PMG, said, “The players were so excited to be here and playing in this series. They are a little disappointed that they had to leave midway, but they are thankful for the sensitivity shown by the organisers to reschedule the league. They all are looking forward to come back and complete the remaining matches as and when they will be held.”

Indian Legends skipper Sachin Tendulkar said that it was the right step under the circumstance to reschedule the tournament. “The rescheduling of this series, held to create awareness about Road Safety, is unfortunate yet the right step. We all hope and pray that the spread of Novel Corona Virus is contained. It is nice to support the cause and spread the message of Road Safety and playing again with some old friends on the cricket field. I look forward to continuing to support this critical cause through the medium of sports.”

Brian Lara echoed Tendulkar’s sentiment and added, “People are hungry for cricket, they are hungry to see legends, like (Virender) Sehwag and Sachin (Tendulkar), when they come out to play cricket. So I think this tournament was awesome. The competition was even more than I expected. It was very special, seeing Sachin back on the field again and seeing the crowd reaction. I think it's a great tournament which is for a cause. Road safety is such a huge thing in India, and not just in India but around the world. To be leading the charge on an improvement in that area, is great. People not only came to see the cricket icons from the past, but they also came in support of the venture, which is great. The situation is a little disappointing now but we are looking forward to come back and take part in the remaining games of the series.”

The Sri Lanka Legends wicketkeeper Romes Kaluwitharana said, “Personally for me, it was special to come back to keep behind the wickets and open from the top of the order while smashing some big shots, just like old days. Before we came down, we weren't expecting so many people to come and watch this tournament. But the love and support the cricket fans have showed us means a lot. I am grateful for the organizers to promote an important cause of Road Safety. It’s very important for us to take it seriously. While I am a bit little disappointed looking at the current situation, but I am glad that the organizers are taking the necessary steps to ensure everything is under control. I am looking forward for things to work out fine at the earliest so that we can come back and finish this series.”