Nearly 290 million eligible voters were unable to exercise their right to vote due to migration. TOI via its campaign urged the Election Commission to find a solution. The Commission recently announced it is working on a technology-led solution to address the issue

In an era of technological advancements, a large concentration of India’s population has migrated to metropolitans in search of better employment, education or simply migrated after marriage. But millions of citizens fail to partake in casting their vote due to geographical constraints.

It is a citizen’s fundamental right to move within the country and it is a citizen’s fundamental right to vote, but one of the either was being compromised! Laying impetus towards the impending cause, The Times of India launched its largest-ever collective campaign, Lost Votes, aimed at getting the right for voting for those who have moved away from the address where their vote is registered.

Drawing nation-wide attention, the publication with each step in the campaign parsed awareness to millions of migrated voters and concerned citizens on the importance of casting their vote and urgency of addressing the gap.

As per the insights gained during the campaign roll-out, 290 million eligible voters were unable to exercise their right to vote, due to migration without a permanent local address. TOI became the voice of the people via their Lost Votes campaign, urging the Election Commission to find an effective, immediate and permanent solution.

Following the year-long campaign, the Election Commission recently announced that they are working on a technology-led solution that will address the issue so that there are no more lost votes.

Sanjeev Bhargava, Director, The Times of India, said, “We launched the Lost Votes campaign last year. Powerful and simple thought: people temporarily not living in the place where their vote is registered are unable to vote. And the number of such eligible voters is close to 30 crore! This campaign demanded tech solutions to enable these lost votes and give back the fundamental right to these citizens of India. More than a million-people pledged support to this campaign. And less than a year later the election commissioner has announced the start of this journey. We are proud to be instrumental to the strengthening of our democracy! Not surprisingly at TOI we say, ‘Change Begins Here’.” 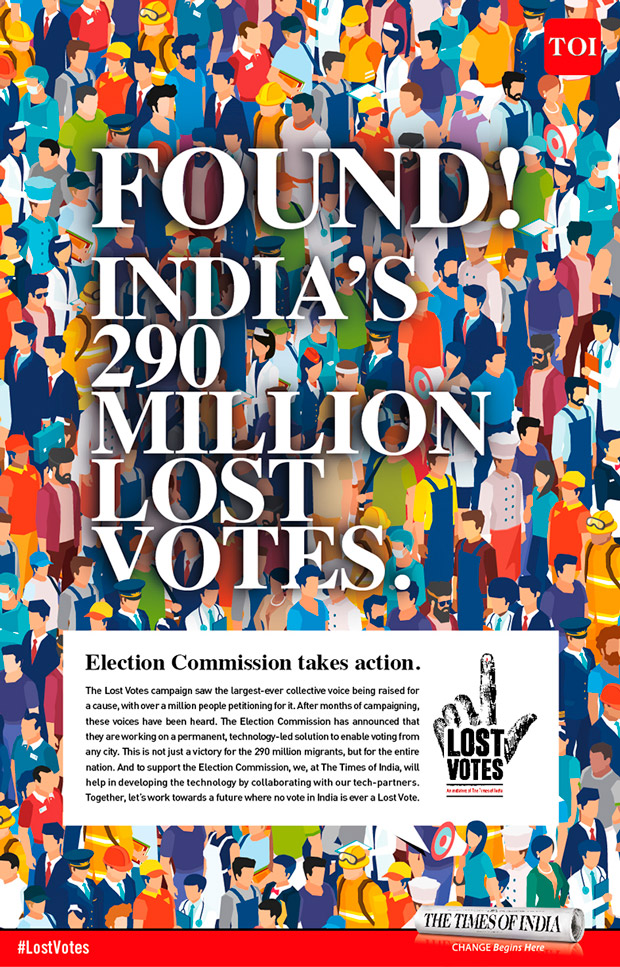