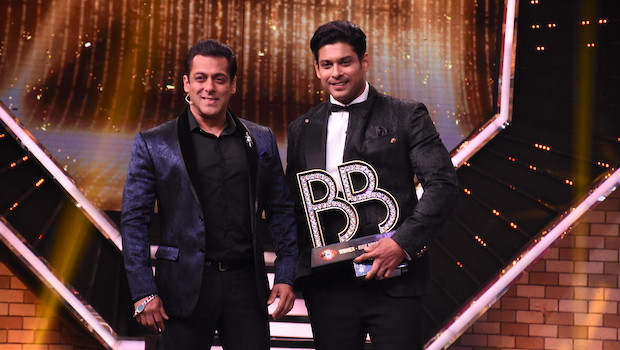 For 140 days, the country obsessed over each one of these contestants, millions tuned in every single day to follow their journey, social media was flooded with conversations and junta showered them with massive support. This and much more, made this season of Bigg Boss historical. After entertaining the viewers with unceasing drama and Tedhe twists - vivo v17 presents Bigg Boss powered by Dabur Anmol came to a close tonight. In an all celebrity season, the show saw many popular faces entering the Bigg Boss house with their head full of dreams, determined to fight for every inch to win the coveted trophy. Rising above all odds and after giving a stiff competition to other contestants, Sidharth Shukla emerged as the winner of the show and was conferred with the BB trophy and prize money of 50 lakhs. Asim Riaz and Shehnaaz Gill were named first and second runners-up respectively. The season concluded in a power-packed evening comprising of performances and acts by the finalists, former contestants and host Salman Khan.

Shukla’s journey has been a challenging one. He was always been vocal about his opinion and stood up for his friends inside the house. His former costar Rashami Desai who he shared a bitter relationship with, did not dampen his spirit. Initially, his strong friendship with Asim was loved by the audience but the happiness was short-lived. Their never-ending fights turned the house into a battleground and became the biggest highlight of the season. But while Shukla fought like a warrior, he loved fiercely too. His love-hate relationship with Shehnaaz evoked many emotions. Irrespective of their share of ups and downs, ‘Sidnaaz’ became the talk of the town and a trend on social media. Known to charm women, he was seen sharing a warm relationship with Devoleena Bhattacherjee, Madhurima Tuli and even Rashami towards the end of the show. The audience also got to see him sharing fun moments with Paras and Mahira and often caught in a crossfire between Shehnaaz and Mahira. Even after facing illness, he did not give up and gave a tough fight in every sense. Like a hero, Shukla definitely stood out in the game and made for a deserving winner.

Commenting on the successful closure of Bigg Boss 13, Nina Elavia Jaipuria, Head, Hindi Mass Entertainment and Kids TV Network, Viacom18, said, “This season of Bigg Boss was a blockbuster in true sense! Along with being the most-watched show on Indian television and the most talked about on social media, it has also successfully set a new benchmark in brand partnerships. What made this year truly special and led to its extension was the support of millions across the nation in the journey of each contestant. Keeping up the momentum, we are ready with another exciting season of television’s biggest stunt-based reality show, Khatron Ke Khiladi, with Rohit Shetty as the host. As we take the difficulty level of stunts a notch higher this season, we hope the audience will shower the same love and support to our khiladis.”

Speaking about the Grand Finale, Manisha Sharma, Chief Content Officer, Colors, said, “From millions of people talking about the show on social media to many more tuning in to support their favourite contestants, this season has truly been phenomenal. The fast-paced tedha concept worked brilliantly for us and opened doors for newer innovations. We also had our many ‘firsts’ this season and it added to us becoming the highest-rated reality show on television. Throughout the season, we made a conscious effort to surprise viewers with the most unexpected twists and the response has been overwhelming. I would like to thank the viewers and Salman Khan for not just hosting the show but being the voice and mentor of the contestants. Sidharth Shukla is a deserving winner and I wish him best wishes for future endeavors.”

Shukla said, “The feeling of being declared as the winner of Bigg Boss is yet to sink in, and I feel on the top of the world right now. Bigg Boss house has been ‘tedha’ for all the right reasons and has made me self-aware of my surroundings. I was true to myself throughout the show and gave my best without having to put on an act. There were moments where I got emotional, made core alliances and some enemies for the competitive spirit of the show.  It was tough to be able to stick around for 140 days, as it required a lot of self-endurance, dedication, and perseverance but here I am holding the trophy in my hand. As I recount the moments, I must add that this wouldn’t have been possible without the support and never-ending love from my fans who made this dream turn into reality. I am taking back the trophy home, but with it, are some fond memories and lessons too, that I will cherish my whole life.”

Abhishek Rege, CEO, Endemol Shine India, said, “This year’s Bigg Boss has been one of the most successful and popular seasons. Celebrities' antics coupled with high voltage drama kept the audiences glued to their TV sets for over 4 months. It has been an incredible journey and the contestants have showcased immense grit and determination to carve out their own path.  As always, Salman Khan has been exceptional in the season and I would like to thank him for indomitable support. I would like to congratulate Sidharth Shukla for winning the title and wish him all the best for their future endeavors.”