Starting February 15, every Saturday at 7 pm on MTV, Roadies Revolution will celebrate the undying zeal of a Roadie coupled with their willingness to inflict tangible progress in society 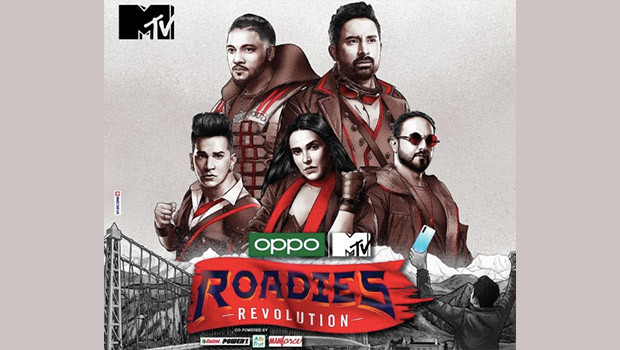 India’s longest-running reality show MTV Roadies is back with yet another milestone in its 17th season. With an aim to trigger social impact OPPO Roadies Revolution co-powered by Castrol Power 1, Alo Frut Juice and Manforce is here to hunt young and determined individuals who have it in them to be the force of change. Starting February 15, every Saturday at 7 pm on MTV, Roadies Revolution will celebrate the undying zeal of a Roadie coupled with their willingness to inflict tangible progress in society.

Commenting on the launch of Roadies Revolution, Ferzad Palia, Head - Voot Select, Youth, Music & English Entertainment Viacom18, said, “Over the past 16 years, Roadies has transformed into a cult, transcending from just television to a broadcast+ ecosystem. The last season of the show witnessed a 37% jump in TSV, 55% growth in watch-time on Voot and clocked 40 mn views of its Voot exclusive content, reinforcing its fandom. On social media, the reach for Roadies Real Heroes doubled last year. We have also licensed the franchise to open Café Roadies in Noida and Club Roadies in Jaipur last year, adding scale to the ecosystem. For MTV Roadies Revolution, we are happy to have OPPO on board as our title sponsor, Castrol Power 1, Alo Frut Juice and Manforce as our co- powered by sponsors. Big Muscle Nutrition joins in as our nutrition partner and Envy as an associate sponsor, as we go on the road with JAWA, fueling yet another journey of this iconic show.”

Led by an epic panel of celebrity leaders, Neha Dhupia, Nikhil Chinappa, Raftaar and Prince Narula, along with host Rannvijay Singha, Roadies Revolution will touch upon several social causes through its journey and encourage contestants to give back to society and work towards its betterment. While Neha Dhupia will be echoing the cause of women’s safety, Raftaar will raise his voice against gender discrimination. Climate change will find a much-needed advocate in Nikhil Chinappa and youth icon Prince Narula will take a stand against the alarming effects of drug abuse. Each of the leaders will champion a social cause close to their heart and create a revolution, but in the quintessential Roadie way. With a perfect blend of adventure, thrill and a grand comeback with bikes this time, the issues highlighted this season will be reflected in the tasks and challenges performed during the journey.

Sumit Walia, Vice President - Product & Marketing, OPPO India, said, “As a brand that keeps young consumers at the heart of our business, we have always aimed at forging partnerships that resonate with our customers. OPPO believes in pushing the boundaries of innovation to exceed customers’ expectations, much like MTV Roadies, pushing its participants to bring out the best in them. We strongly believe that this symbiotic partnership will help us develop a stronger connect with the youth. We wish MTV and the participants of the show a tremendous success.”

Rannvijay Singha said, “Bringing the 17th season of a show that has been a defining experience for me is surreal. With powerful themes and innovative concepts, Roadies has continued to stay relevant amongst the audience. This year, Roadies Revolution takes a bigger leap in directing the youngsters to commit themselves for greater good. We are glad to take this phenomenon ahead and hold the baton high to create a change, together with the youth.”

The auditions for Roadies Revolution saw an overwhelming response with thousands of fans showcasing their zest to be a Roadie. In addition to Delhi, Pune and Chandigarh, Roadies made a comeback to Kolkata after 2 years to hunt for youngsters in the city who have it in them to stand out. Celebrating the theme of propelling social good, MTV tied up with Chelsea India and Magic Bus Foundation for a friendly football match in Kolkata to inculcate the need of fitness and sports amongst children. Celebrity leaders Neha Dhupia and Nikhil Chinappa along with Rannvijay Singha also led a troupe of 25 bikers in Pune to echo the cause of road safety before wrapping up the auditions in style.

Every year, Roadies takes the viewers on a breathtaking journey through the scenic landscapes of India. It will be interesting to see where the troop would be headed to this year.