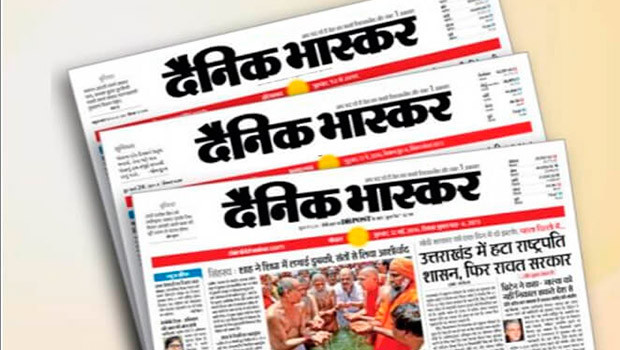 DB Corp has announced that Dainik Bhaskar with over 4.3 million copies in circulation has become the world’s third-largest circulated newspaper as per the World Association of Newspapers and News Publishers’ (WAN IFRA) latest edition of World Press Trends, 2019, Report.

Further, as per the last published Audit Bureau of Circulation (ABC) survey data (Jan – Jun’ 2019), Dainik Bhaskar continues to be the largest-circulated newspaper of India with leadership position in key states.

WAN IFRA publishes the ‘World Press Trends’ which is the primary and most authoritative source of data on the newspaper industry worldwide, annually since 1989, and is now available in an interactive format. The World Press Trends Database provides data and figures on the global newspaper industry in terms of circulation, readership, revenue, advertising expenditure, digital usage, data for top selling titles in each country and more.

Girish Agarwaal, Promoter-Director, DB Corp Limited, said “This is truly a great moment for us. The recognition of being ranked as the 3rd largest in the World and the only Indian news daily to in the top 3 is a proud development for the entire Bhaskar team and a reflection of our hard-work and sincere efforts towards driving DBCL to this position. Dainik Bhaskar’s successful journey from being a mere 35th player in 2013 to attaining the 3rd Rank in the World is an outcome of a well-thought editorial strategy that continued to maintain a reader-centric approach, idea-based journalism and knowledgeenriched content. We sincerely thank our readers who have shown their faith in our editorial. The Dainik Bhaskar brand has reached a global level with this ranking and we will strive harder to maintain and aim for top ranking globally, with the support of all our associates.”