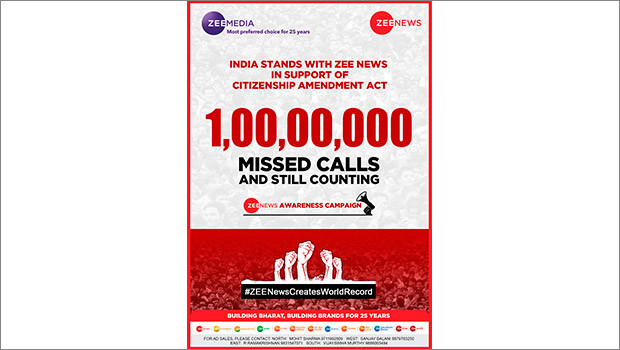 The Zee News Missed Call Campaign to create awareness among the people about the Citizenship Amendment Act (CAA), 2019, received an overwhelming response as over one crore people supported the initiative. The Zee News campaign has become the biggest-ever digital initiative in the country.

After the announcement of the Citizenship Amendment Act, various states and cities in India went into a state of chaos. Even after getting majority votes in both the houses (Lok Sabha and Rajya Sabha), people came out on roads to protest against the bill. While the media focused on the protests, Zee News tried to determine what the rest of the India wanted.

To know the other side of the story, Zee News initiated a nation-wide campaign, “The Missed Call Campaign”, to determine what Indians sitting inside their houses and offices thought about the bill.

The campaign urged the people who supported CAB/CAA to just give a missed call to Zee News. One crore (10 million) missed calls and still counting. Zee News brought supporters of CAA/CAB on one stage just through a missed call.

Zee News took the initiative to break the myths and the people of India made it a non-violent revolution.

Here is a glimpse: