Brands that sent engagement meters racing through 2019 on Twitter

Some of the brands that made it to the list include OnePlus India, Uber India, Amazon Prime Video, MG Motor, Kia Motors and Google India 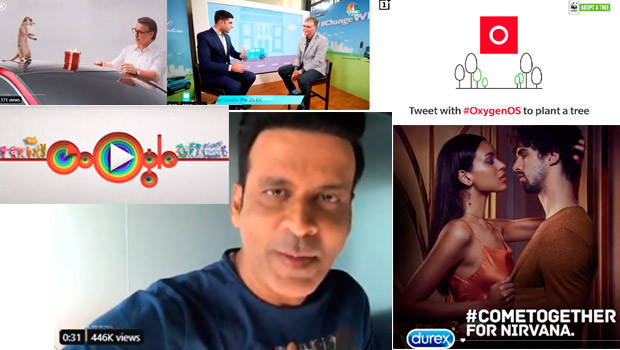 This year, brands across sectors rolled out innovative campaigns to keep up with current trends, connecting with Twitter’s audiences. From launches and promotions, to connecting with what’s happening, Twitter’s varied formats cater to every brand’s needs, and align methods with the brand’s messaging to deliver customised campaigns.

Here is a look at some of the best brands on Twitter and how they stood out in their respective categories.

This year, brands took a stand on causes. OnePlus India (@OnePlus_IN) celebrated 1500 days of its operating system, #OxygenOS, the lifeline behind the smartphone brand, and tied the idea to an important cause.

OnePlus India (@OnePlus_IN) partnered with WWF (@WWFINDIA) and utilised Twitter’s ‘First View’, a feature with a conversation card. This card prompted audiences to Tweet with #OxygenOS, encouraged by the promise that the brand would plant a tree for every Tweet. Each Tweet also initiated an auto-response, which was the brand’s way of expressing gratitude towards those who engaged with the campaign.

The campaign was activated across key airports in India and showcased real-time Tweet counts, along with dynamic user appreciation Tweets. By the end of September 13 — the day of the campaign, 27,333 Tweets were recorded, with as many trees being planted by OnePlus India (@OnePlus_IN). The campaign resulted in a 15x rise in daily conversations for the brand, making OnePlus India’s (@OnePlus_IN) Oxygen campaign the Best Purpose-Driven brand of the year on Twitter.

Here's celebrating what breathes life in this world & into our products????

Join us as we team up with @wwfindia to celebrate 1500 days of #OxygenOS by planting a tree for every tweet.

Following the Supreme Court’s landmark judgement that struck down #Article377, Twitter was buzzing with discussions about the LGBTQ+ community. Uber India (@Uber_India) started a movement #LoveMovesForward to encourage these conversations. The brand wanted to support the movement on a day that has always stood for love i.e. Valentine's day. To honour that all love is true love, @Uber_India petitioned The Unicode Consortium (@unicode) — a non-profit organisation that develops emojis, through Change.org India (@ChangeOrg_India) to create a unique ‘Pride Heart Emoji’.

With the #LoveMovesForward movement, we hope to give love an inclusive expression, and the world a chance to express inclusivity ever more frequently with the Pride Heart. Thanks @ChangeOrg_India for giving us the platform! Add your voice to the movement: https://t.co/Nh8WEhhXgu

Amazon Prime Video (@PrimeVideIN) launched a campaign to announce their original show, #TheFamilyMan to drive anticipation towards the launch of the teaser. Two product propositions were utilised to create buzz. An automated solution was created, which enabled people who engaged with a Tweet by Manoj Bajpayee (@BajpayeeManoj), the lead actor, to unlock the show’s trailer before its release date. A customised emoji was designed based on the lead character who played the dual role of a family man and that of a spy. The unique emoji revealed the character’s second personality once the Twitter app was switched to Dark Mode.

The campaign resulted in 1.3 million video views and 17,000 opt-ins for reminders of the trailer launch, successfully conveying the message of the show while delivering strong results.

Q: what will it take to watch #TheFamilyMan trailer before the rest of the world watches it?
A: ❤️ or ???? this tweet and follow us so that we can send you a secret trailer link! pic.twitter.com/gViaU1Abua

Earlier in the year, Morris Garages (@MGMotorin) successfully launched the brand in the Indian market, positioning themselves as a technology company rather than an ordinary automobile manufacturer. In line with this, the MG ZS EV was the perfect product that the brand could introduce in the Indian automobile market.

The promoted trend #ChangeWhatYouCan received a 36% increase over the average trend impressions for the category. As a result, MG Motor India (@MGMotorin) dominated electronic vehicle conversations on Twitter this year.

Not having enough range in an EV will stop people from adopting it? ???? #ChangeWhatYouCan

Kia Motors (@KiaMotorsIN) catapulted itself to the mainstream auto brands conversations on Twitter by bringing #ThePowerToSurprise to the platform. The brand leveraged its fictional characters of Meerkat (@Meerkat_Me) and Designer Johnny (@_DesignerJohnny), and waged a mock war between them to bring to people the #GamesofInspirations. The brand aimed focussed on its great design, and had fun while doing it, rewarding people for their creative engagement. To further popularise the brand, Kia (@KiaMotorsIN) onboarded Tiger Shroff (@iTIGERSHROFF). As #TeamTiger and #TeamMeerkat built excitement on the platform for the launch, Kia (@KiaMotorsIN) kept the momentum alive by engaging other media partners in their folds. In addition to this, Kia Motors (@KiaMotorsIN) cemented its position as a master of topical moments as it kept conversations going around Engineer's day, Suits, Game of Thrones, Wonder Woman and the likes.

Hey @KiaMotorsIN bought this expensive gift for @_DesignerJohnny from London ???? but he won’t take it ????. Please tell me how do I become one of the Magical Inspirations for Kia Motors? ???? #Magicalinspirations #StunningDesigns #GameOfInspirations pic.twitter.com/uQKzeWdKhP

When simple straight lines get turned into a Masterpiece, you see Kia’s Power to Surprise. Are you ready for Kia? #KiaInIndia pic.twitter.com/Luljhm2eET

Google India (@GoogleIndia) made the most out of the short-format video this year, owning Twitter video. The brand leveraged topical moments to its advantage by creating short videos and GIFs while keeping its product at the core of its communication. The videos were creatively designed to keep the viewer engaged, keeping Twitter’s best practices in mind, and were also receptive to the brand’s message.

Can’t wait for the next match? ????
Just ask your Google Assistant for the latest schedule, stats, standings and more. #CWC19 pic.twitter.com/yJ5bT1p0Cj

Taking us through five decades of LGBTQ+ history, today’s #GoogleDoodle marks the celebration of 50 years of Pride ????️‍????

Durex India (@DurexIndia) made the most of Twitter’s conversational nature with its own unique voice which perfectly suited their product — playful and flirtatious. Durex India (@DurexIndia) did this by participating in topical conversations through memes and Tweeting contextual images. The brand mastered the art of puns with innuendo that kept audiences constantly engaged, making the account a creative, unique follow.

India has chosen its favourite! And it's the exciting Bubblegum flavour! #BlowUpTheBubble. So, how about we make blowing a lot more fun than it already is?
Introducing the bubblegum emoji! Now Retweet or ❤ this and find yourself with an exciting surprise!

From 0 to ???? with Durex Mutual Climax Condoms! To get your pack, click on https://t.co/Zxm4JtVXsc. You’re welcome ????. #ComeTogether pic.twitter.com/MKGADd8OFR

This year, Cisco Systems India (@cisco_in) made the most of going live on Twitter.  The feature gave the brand an opportunity to speak to their key audiences including BDMs, CTOs, CEOs at scale, keeping them updated with Cisco's latest technology and products. The success rate of the feature ensured a place in nearly every launch by the brand.

The live stream video of Cisco’s event, #CiscoConnectBangalore, which propagated the brand’s messaging of #YouMakePossible, garnered a record 51k video views, with an 18% video view rate in 1.5 hours only.

Cisco Connect Bangalore brings you a platform to experience the power of technology. Join live as we help you in leveraging technology to build a world of possibilities. #CiscoConnectBangalore #Youmakepossible https://t.co/5m6CGSAxWB

Best Use of Creators: Spotify India’s ‘There’s a playlist for that’

Spotify (@spotifyindia) launched in India as a music listening app with over 3 billion playlists this year. The brand wanted to establish music’s connection with every expression or moment. Identifying moments from every-day lives, @spotifyindia designed playlists for various situations and told people, “There’s a Playlist for that”. The brand generated participation on the Twitter timeline by seeding situations and hyper-local interests to initiate conversations with audiences. The brand also engaged with their target consumer base by participating in real time and relatable exchanges as they happened in the moment.

@spotifyindia travelled across timelines as it looped in influential creators on the platform, connecting multiple moments and expressions to music, with a playlist for everything!

Me: Trying to come up with a killer punch line@SpotifyIndia: There's a playlist for that#SpotifyIndia

Me: *Thinking of a joke that offends no one*@SpotifyIndia: There's a playlist for that#SpotifyIndia