Zee5 unveils plans for Bangladesh and rollout of various initiatives

Two Originals and a talent hunt have been announced. It is the first international market chosen for local content production and there are plans to open a local office in Bangladesh

‘Stronger Together’ was the theme at the event held in Dhaka recently where Zee5, the video-streaming platform for South Asians and beyond from Zee Entertainment Enterprises Limited, shared its plans for Bangladesh and the rollout of various initiatives to drive growth in the market through strong local collaboration.

The announcements were received by a positive response from a room packed with minsters, the entire advertising and media fraternity, the who’s who of the Bangladeshi television and film industry, and journalists.

Among the multiple announcements made was the launch of Zee5’s first Bangladeshi Originals: a web series and a movie, both to be released within the next few months. Both Originals are being produced in partnership with local production house Asiatic’s Good Company and will have an all-local star cast.

With these shows, the platform now will add on a slate of local Bangladeshi content also, which will give the local content and talent tremendous exposure in global markets.

Bangladesh is in fact the very first market in which Zee5 is rolling out its local content production, a significant statement of how deeply the platform has prioritised this market.

First up for launch is a romantic movie titled Jodi.. Kintu.. Tobuo. Directed by Shihab Shaheen, this movie will take the audiences on a journey of what happens when a groom gets cold feet before his wedding day.

Contract, a web series based on a novel written by Mohammad Najim Uddin, is another Zee5 Original Series in the works. This is a cat and mouse thriller about a contract killer, a police cop and an underworld don. The series is being directed by Krishnendu Chatterjee, Tanim Noor and Parthe Sarkar.

Zee5 shared details of its upcoming Talent Hunt titled ‘Bangladesh’s Global Superstar’, which will be launched in January. Providing a global stage to the vast local talent in Bangladesh, this talent hunt will give them an opportunity to conquer the OTT entertainment world with a chance to feature in Zee5 Originals that get viewed across 190+ countries.

To participate, viewers are invited to upload their auditions on the brand’s website www.global-superstar.com along with some basic details about themselves. Pure talent is the biggest evaluation criteria of this hunt. A set of celebrity judges will shortlist five best male artistes and five female artistes. The final leg of the hunt will end with two artistes being crowned as Bangladesh’s Global Superstars.

Amit Goenka, CEO, Zee International and Zee5 Global, said, “Localisation is a very key part of our agenda this year as we look to establish deeper relationships with markets. Bangladesh has always been a high priority market, and we look to strengthen our ties further through strong local collaborations. Bangladesh will be the very first market in which we will be rolling out local language productions and I’m also very happy to share that we plan to have a local office here soon.”

Archana Anand, Chief Business Officer, Zee5 Global, said, “Bangladesh is a young country poised for massive growth, and the possibilities are tremendous. We’re very excited to be here in Dhaka to share the various initiatives that we will be rolling out over the next few months along with our local partners. Our vision is one of true collaboration in this very exciting market where both of us grow and learn together to scale new heights.” 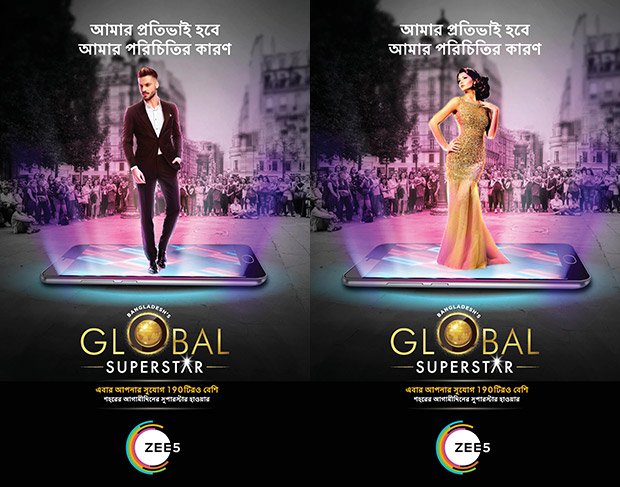 Tags: Stronger Together Zee5
More from this section