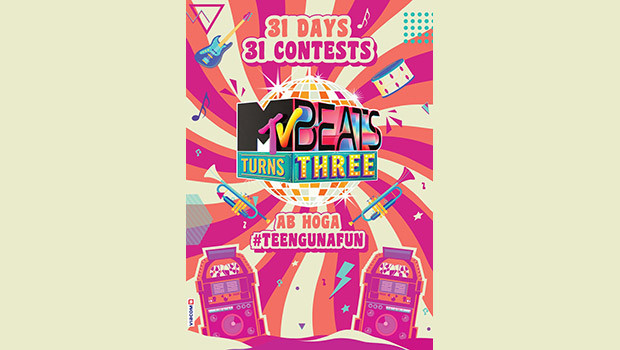 MTV Beats, the 24x7 Hindi music channel from Viacom18 with focus on Bollywood, has stepped into its third year. MTV Beats has rolled out a fun party for its third anniversary in December, coupled with a unique theme and engaging activities with #TeenGunaFun.

The channel has reached approximately 500 million viewers over the last year riding on their tentpole properties and integrated campaigns. It garnered viewership share of 15% in FY’20 riding on programming and marketing innovations.

Ferzad Palia, Head, Youth, Music, and English Entertainment, Viacom18, said, “Playing strong on its MTV lineage, MTV Beats has consistently and successfully cemented itself as a pureplay Hindi music channel over the past three years. As a testament to the success of its differentiated content, MTV Beats has witnessed a 30% increase in time spent in FY’20. We have experimented with newer interactive formats that trigger higher engagement and break the monotony in a cluttered category, leading to MTV Beats being the fastest-growing channel in the category.”

To boost up the filmy keeda, for its third birthday celebrations, MTV Beats has kickstarted ‘31 days, 31 contests’ on the channel.

Three winners will get a chance to win exciting prizes every day with the thematic contests ranging from Music Mojis on Mondays that will ask viewers to guess the songs based on emojis to Dil Sharaads on Wednesdays, that will let viewers guess the movie from decoding mime actions to Filmy Chakkar on Fridays, which will be all about deciphering the clues to guess the movie.

The channel will also host a Retro-themed Bollywood party, led by comedian and host Sanket Bhosale and Bollywood singer Akasa, whose shows Baba Ki Chowki and MTV Beats Top 20 Countdown are popular with the audience. As part of its marketing initiative, MTV Beats in its third birthday celebration introduced a new campaign, MTV Beats Birthday Machine, a unique real-time video wish innovation for fans to send their friends and families a filmy-personalised birthday wish.