Watch Hollywood movies every Monday-Friday at 9 pm, and win exciting prizes every day, along with a chance to win a trip to Hollywood 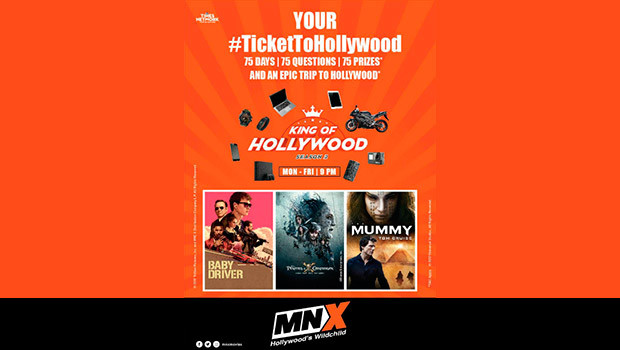 With an aim to find the biggest Hollywood movie buff, MNX, the Hollywood English Channel, has announced the second season of its property ‘King of Hollywood’. Started on December 2, Monday to Friday at 9 pm, the 75-day property is featuring 75 Hollywood movies and offering movie enthusiasts an opportunity to answer 75 questions and win exciting prizes, including PlayStations, iPads, laptops, smartphones, GoPro, Fit bits, MNX branded merchandise through daily contests and a grand prize trip to Hollywood, Los Angeles, California.

MNX also initiated #TicketToHollywood contest, where viewers can watch their favourite Hollywood movies at 9 pm and give a missed call on the number flashed during the movie to answer the question. The highest participating viewer with the maximum number of correct answers stands a chance to score the grand prize, apart from the daily wins.

Vivek Srivastava, President, Strategy and Business Head, English Entertainment Cluster at Times Network, said, “After the phenomenal success of Season 1, we are delighted to bring back King of Hollywood, an interactive property which offers our viewers a complete Hollywood experience. MNX, since inception, has attracted a loyal base of Hollywood aficionados and we take joy in rewarding our discerning viewers. We are confident this season will double up our viewers excitement as we find the next King of Hollywood.”

Under this property, MNX will feature movies such as The Revenant, Hansel & Gretel: Witch Hunters, Hobbit: The Desolation of Smaug, Angry Birds Movie, Ghostbusters, Pirates of The Caribbean: Salazar's Revenge, The Mummy, Terminator 3: Rise of The Machine and many others.

Tags: MNX King of Hollywood
Advertisment
More from this section