At the recent trailer launch event of the film, the specially curated 3D VR narrative from the series presented a surreal experience for the audiences present. The new season of the horrex franchise will launch on December 18 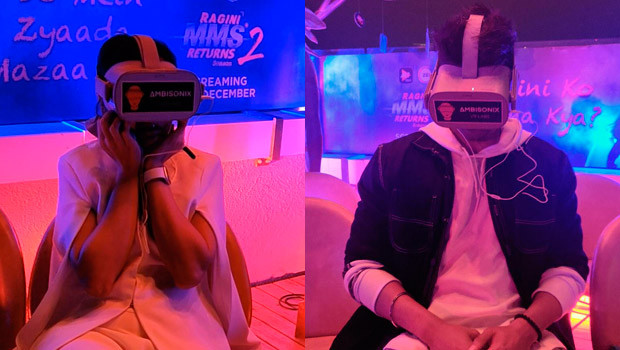 ALTBalaji and Zee5 have introduced an industry-first Stereoscopic 3D 360 virtual reality (VR) narrative film at the recent trailer launch event of their upcoming horrex — Ragini MMS Returns Season 2. The specially curated 3D VR narrative from the series presented a surreal experience for the audiences present at the event.

Audiences were in for an incredible visual treat as they were given VR headsets that immediately transported them to the terrifying yet sensual world of Ragini. Experiencing interesting glimpses from the series in an up close and personal fashion, the 10-minute long VR film entertained some and offered a spine-chilling experience to others.

The story begins with Meena Sharma played by Sunny Leone, going to a villa and things start to slip out of hand on the first night itself when she senses something is wrong with the place. It also gives a sneak peek into the world of Ragini Shroff, a final-year student played by Divya Agarwal. As her closest friend, Varsha is getting married; she goes on an all-girls trip with her friends to celebrate a bachelorette weekend.

Divya Dixit, Sr. VP and Head Marketing, ALTBalaji, said, “VR is one of those emerging technologies that is leading the way for interesting and innovative storytelling formats. More than being an extension of entertainment, VR storytelling is unique as it creates exceptional immersive worlds and soundscapes. Even though it is still at its nascent stage, we are extremely proud to become the first OTT platform to adopt this sophisticated technology. We seek to be pioneers in using virtual reality in mainstream entertainment.”

Shatadru Sarkar, founder of Ambisonics VR Labs, the Studio that created the VR film, said, "We are thrilled to have worked with ALTBalaji on bringing the Ragini MMS franchise to life in virtual reality. To the best of our knowledge, this is the first stereoscopic 3D 360 VR film out of India, and we hope ALT's foray into the immersive media space brings more attention to this new format. We truly believe that this is the next 'game changing' innovation in the increasingly crowded OTT space, and an evolution in consumer experience, from story-telling to story-living."

Clyde DeSouza, who directed the VR film, added, "With this VR film adaptation of its hit series, ALTBalaji has shown foresight in introducing virtual reality filmed entertainment to mainstream OTT, setting the stage for Immersive media created in India."

The new season of horrex franchise is all set to launch on December 18.