The maker of Officers Choice Whiskey and Jolly Rogers rum has seen a good demand from millenials and so the company increased its media spending on digital. In a conversation with BestMediaInfo.com, the COO of Allied Blenders and Distillers talks about the various trends in the industry and the projected growth 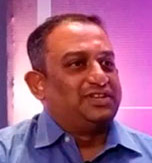 "The consumption habits of millennials are changing. The millennial also seems to be drinking whiskey. We see a lot of people gravitating towards whiskey and women who are 40+ are drinking malt whiskeys, so there is a trend towards whiskey," Basu added.

He said whiskey as a segment was growing because the companies were doing a lot of marketing around the category.

Talking about the growth of the company, Basu said the company is planning to strengthen its footprint in India. The company that has quite a strong presence in Southern and Northern India is now focusing on the western region.

The company, which sells around 38 million cases of whiskey in a year, plans to grow at more than 10%.

As far as its media strategy goes, it will be spending around 40% of the total budget on TV and around 30% on digital. Given that the alcohol category cannot do product advertising, ABD has always played on the human angle in its advertising for all its products.

ABD currently has an over 10% market share in India's whiskey market.

For its premium whiskey brand Sterling Reserve, the brand plans to associate with musicians and create an impact as the format resonates well with the new-age consumers.

Basu said that the industry was still bouncing back from the impact of the ban on the sale of alcohol within 500 metres of highways.

"We are still bouncing back from previous hiccups of the 500-metre ban or demonetisation, which took some time. The first quarter of this year was very decent but the last quarter has seen a slowdown. I think that the slowdown happened at the lowest and the highest end of the pyramid because at the highest end people (the upper middle income groups), the occasions reduced. And at the lower end, the pinch of the slowdown is felt the most.ŌĆØ

Basu said one reason why the alcohol market is seeing an expansion in young India is because now drinking has more become more responsible. "The cab aggregators have made drinking in clubs easier as people don't have to worry about driving back," he said.

Basu said that alcohol sales will still remain outdoor-focused and app delivery may not work in India.

We want to be a household name in the next few months: Karan Shroff of Unacademy