No political ads on Twitter: How will it benefit other platforms?

Indian political parties have been actively using promotional tweets and hashtags to push their agenda and influence opinion. Will Twitter’s decision to ban political ads help domestic publishers and social media giants such as Google and Facebook? BestMediaInfo.com finds out

But with Twitter’s announcement to ban political ads, the leading digital platform, which plays a key role in forming opinion, is off the reach for political parties. Twitter CEO Jack Dorsey announced on Wednesday that the platform would ban all political advertising with effect from November 22, 2019.

A leading player deciding to block political advertising means that other domestic news publishers and other social media giants such as Facebook and Google might be making some gains.

However, Ashish Bhasin, CEO APAC and Chairman India, Dentsu Aegis Network, feels despite Twitter being hugely popular among politicians, political advertising on the platform in India hasn’t been much and the move to ban it would have very little impact or no impact on the entire ecosystem.

“Twitter is used as a medium but not a significant amount of money is spent on paid advertising. In my view there will be no significant benefit to others,” Bhasin said.

Nambiar of Tonic Worldwide also said that the move will not benefit any other digital player.

Even if the platform does not get a lot of revenue from political advertising in India, it does play a very significant role in opinion making.

Twitter took the decision in the wake of an ongoing international debate on whether political advertising, which at times turns out to be faking statements, be banned on social media platforms such as Twitter and Facebook. 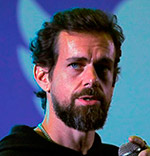 Explaining the reason behind this move, Dorsey said that the reach of such messages "should be earned, not bought".

“We considered stopping only candidate ads, but issue ads present a way to circumvent. Additionally, it isn’t fair for everyone but candidates to buy ads for issues they want to push. So we're stopping these too,” Dorsey had said.

However, Facebook, which earns less than 0.5% of its total revenue from political advertising, said it would continue to run political ads.

“Ads can be an important part of voice, especially for candidates and advocacy groups the media might not otherwise cover so they can get their message into debates. And it's hard to define where to draw the line. Would we really block ads for important political issues like climate change or women's empowerment? Instead, I believe the better approach is to work to increase transparency,” Facebook CEO Mark Zuckerberg had said during an earnings call.

Tags: No political ads on Twitter
More from this section

Twitter bans sharing of images and videos without consent