The agency had created a print campaign for HealthCare atHome, informing the citizens of India about living will 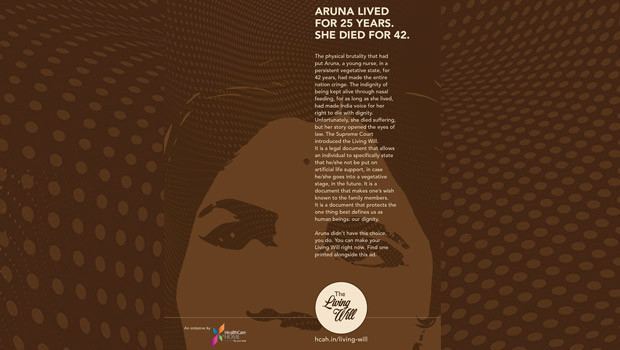 “An Ad That Became A Living Will” created by McCann Health India for client Healthcare At Home was honoured with a Global Bronze Award at The Global Awards 2019 held last week in New York City. McCann Health had created a print campaign for HealthCare atHome, informing the citizens of India about living will.

Read about the winning campaign here:

Educating people about ‘living will’, a way to die with dignity

At the Global Awards 2019, FCB Health Network was in the spotlight earning the title of Global Healthcare Network of the Year for the third consecutive year. The network took home a total of 4 Global Gold Awards, 5 Global Silver, 8 Bronze, and 16 Finalists.

Area 23, an FCB Health Network Company, was recognized with the title of Global Healthcare Agency of the Year for the third year running. The agency earned 3 Global Gold Awards, 2 Global Silver Awards, 7 Bronze and 8 Finalists.

“Black Supermarket” from Marcel Paris was center stage earning the prestigious Grand Global Award. Client Carrefour challenged the agrochemical lobby and law that allows access to only 3% of existing fruits and vegetables in the Official Catalogue of Authorized Species. The campaign challenged people to go to the Black Supermarket and to sign the petition to change the law in the name of biodiversity and health, and they succeeded.

The first annual Global Good Award went to BETC São Paulo for “The Dissolving Poster” for client Habitat for Humanity. The campaign was launched to protect areas in countries like Brazil where it rains all year round and the accumulation of standing water results in outbreaks of Aedes aegypti mosquito, which transmits Dengue, Zika and Chikungunya viruses. To raise awareness, special posters were created that inform people on sunny days and dissolve when it rains to kill the mosquitos before they hatch.

The Global Good Award was selected by the Executive Jury from top-scoring Gold entries or campaigns whose goal is to encourage social good and beneficial behavior to facilitate change resulting in a positive outcome for individuals, causes, society, and the welfare of animals and the environment.

The 2019 Global Awards Regional Agency of the Year Award is awarded to the highest scoring agencies within a region:

“The Global Awards celebrates 25 years of tradition, and this year’s standout work is representative of the innovative work being created around the world.  Many of our judges noticed a marked increase in the quality of work entered, and that’s what 25 years of competition is really about raising that quality,” said Fran Pollaro, Executive Director of New York Festivals Global Awards. “We’re honoured to recognize cutting edge Healthcare & Pharma (Rx) work that is raising awareness not just about life threatening health issues, but coping well with illness, and ultimately living well.”

Entries striking Gold include: Area 23’s “Get Up Alarm Clock” for Lartruvo. The 3G-enabled Get Up alarm clock operated through Twitter and utilized a custom DM inbox allowing friends and family of patients with soft tissue sarcoma (STS) to send them messages of support daily. The messages were then projected onto the bedroom ceiling at the patient’s desired wake-up time. Area 23 earned 2 additional Global Gold Awards for “One Word” for Constant Therapy, a wonderful example of gripping animation and storytelling representative of the patient’s struggle with this illness.

FCB Health New York earned the Global Gold for “Still Not Out of The Water” for client Colin’s Hope. The print and website campaign were designed to be a resource for parents and caregivers worldwide by providing a multifaceted prevention approach that included information about lesser-known drowning symptoms—ones that can occur even after leaving water. The campaign provided audiences with the most accurate information so that they can act accordingly in a drowning event.

McCann Health was in the spotlight taking home the Global Gold for “The Urban Eye Test” for OCO Optometrists. The OOH eye test conducted in London during Oct 2018 utilized floor panels that were placed on streets and sidewalks that became diagnostic tools for poor eyesight. A QR code tagged to each location allowed users to instantly book an optometrist appointment, allowing the ability to monitor how people’s on-street diagnosis became actual eye tests.

Double Global Golds went to Publicis Life Brands UK’s “Commitment To Harmony” for client Tremfya. The animated 3D film starts with hypnotic and seemingly abstract shots of objects moving within a beautifully synchronized machine designed to depict Janssen as masters of harmony. The film illustrates how Janssen’s skills and abilities allow them to flawlessly manufacture the seemingly impossible – products that can remove disease with minimal impact on the rest of the body, positioning Janssen not just as a pharmaceutical company, but as absolute masters of harmony.

Serviceplan Health/Serviceplan Group Germany earned the Global Gold for “Made in Fukushima” for client Meter Group. The March 2011 tsunami that hit the Fukushima Daiichi Power Plant caused a meltdown of the nuclear reactors contaminating Japanese farmland. Environmental technology specialists from METER developed a sustainable decontamination method allowing rice to grow safely. The technological data was turned into an easy to understand book made from the rice straw grown on decontaminated fields to educate people and remove the stigma. A 1000 copies of the first edition of Made in Fukushima was sent to decision makers in the environment and food industries and positive PR resulted in the rise in price of Fukushima rice.

Students Rasesh Patkar, Swarna Thomas, and Laura Starace of the Miami Ad School Hamburg were honoured with the Global Gold for “d-spot” for client Durex. The winning digital/mobile entry targeted young people who know about the consequences of unprotected sex yet refuse to carry protection with them. To inspire them to carry a condom with them every day, Durex condoms were turned into little pocket-passwords for free Wi-Fi hotspots.