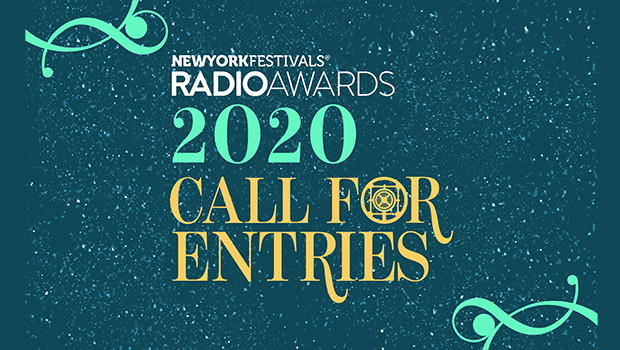 World-wide since 1982, New York Festivals Radio Awards is now open for entries. For the first time the NYF’s Radio Awards winners will share the stage and the spotlight with NYF’s TV & Film Awards medal and trophy winners at the inaugural Storytellers Gala. Both competitions will be honoured on Tuesday, April 21 at the annual NAB Show in Las Vegas.

“Stories give us a common language – that’s the way we communicate with each other - and today’s technology provides so many opportunities that weren’t possible or even imaginable in the past,” said Rose Anderson, VP & Executive Director, New York Festivals. “This spring, we will celebrate the men and women from around the world whose innovative work impressed our grand jury panels.”

The Storytellers Gala, celebrating global content creators from Radio, TV and Film and across all platforms, marks the tenth year of NYF’s strategic partnership with NAB Show. 2020’s multi-competition gala will feature award-winning guest presenters from around the globe and will bring a new level of prominence, interest, and recognition for all our participants which will continue in the year ahead.

The Radio Awards receives entries from radio stations, networks, and independent producers from over 30 countries around the globe. The mission of the competition is to honour the achievements of content creators who make up the global storytelling community.

Each year, New York Festivals invites award-winning industry leaders from around the world to become members of their world-class Radio Awards Grand Jury. Those jurors include some of the most world’s recognizable voices and captivating content producers in the radio industry. Entries are judged on production values, organization, presentation of information, creativity, and use of the medium.