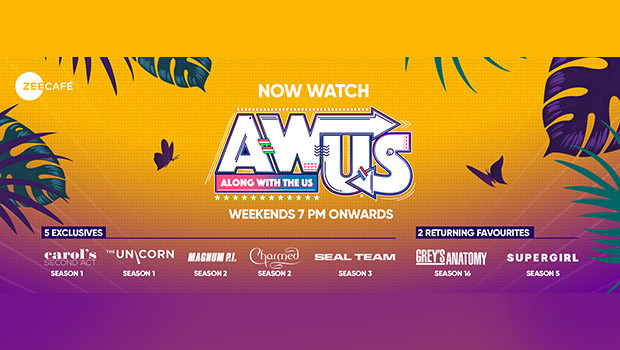 Zee Cafe has launched two content blocks with the biggest, freshest and award-winning shows in its long running content blocks- 'Along With The US' airing, weekends at 7 pm all through October and 'Hollywood On Café' starting October 14, weeknights at 10 pm.

While ‘Along With The US’ features a mix of iconic and latest shows along with the U.S, ‘Hollywood On Café’ brings the scale and grandeur of Hollywood on television.

The stellar line-up for ‘Along With The US’ empowers entertainment enthusiasts to discover the cool, witness the new and watch it before anyone else. The block promises flavours from the comic universe to the medical hallways and from the fantasy world to the action-packed alleys, catering to the taste-buds of Zee Café’s diverse viewers. The line-up features latest seasons of the most iconic shows on Zee Café – Grey’s Anatomy S16 – a season of family, expansion and Supergirl S5 - touted as a ‘fight for the soul’. That’s not all! Together with an array of all new shows such as The Unicorn, Carol’s Second Act, Seal Team S3, Magnum PI S2 and Charmed S2 available exclusively on TV on Zee Café and nowhere else, the block promises to leave you hooked.

What’s more? With an unmatched cinematic experience, ‘Hollywood On Café’ features top-rated mini-dramas of Hollywood stature. Truly bringing the scale and extravagance of Hollywood on television, the block enables viewers to experience a Hollywood-level hangout. The line-up features world-class shows on television including thrillers like LA’s Finest, The Son and The Counterpart S2, along with the controversial plots like The Loudest Voice and City On A Hill. Each of these world-class shows feature Academy Award-winning cast and crew from the likes of Russell Crowe, Ben Affleck and Matt Damon and the Golden Globe winner Kevin Bacon among others.

“Over the years, we have built these content blocks to reflect the channel philosophy of All Eyes on New with the freshest shows and newest seasons. Last year, Along With The US grew the 7 pm – 10 pm slot viewership by 52% (BARC, NCCS AB 15-40-Megacities). Shows such as The Sinner and The Night Manager, as part of HollywoodOnCafé, saw a jump in viewership by 75% and 55%, respectively. This year we are sure the Zee Cafe subscribers will be delighted to watch returning favourites like Supergirl and Grey’s Anatomy and discover 8 new shows” he added.

Tags: Zee Cafe Along With The US Hollywood On Cafe
Advertisment
More from this section