The advert highlights the potential lost to the world when children’s voices are silenced due to hunger. The narrative sees a group of Syrian refugee children playing in rubble in an apparent war zone. The creative force behind is Sir John Hegarty of The Garage Soho 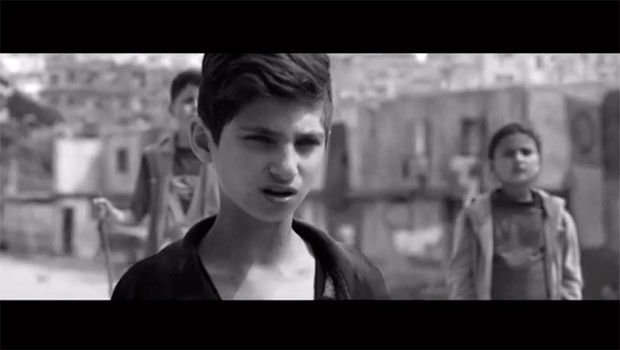 The United Nations World Food Programme (WFP) has launched its cinema ad campaign ‘Feed Our Future’ in India. Based on last year’s success, WFP is again collaborating with UFO Moviez, India’s in-cinema advertising platform, and SAWA, the Global Cinema Advertising Association, for the second time to raise awareness on hunger and malnutrition, a reality facing millions of people around the world.

The campaign launch event included a panel discussion hosted by TV host Mini Mathur, featuring actress and director Nandita Das and filmmakers Neeraj Ghaywan and Anubhav Sinha, all of whom shared their perspectives over cinema and social change. Through a partnership with Facebook, the event took place via a live broadcast from the social network’s Mumbai office. The campaign is also being supported by Showbox Music TV Channel, LF (Living Foodz TV Channel) and Red FM 93.5.

“Cinema does not create revolutions but has the power to inform, create empathy, challenge prejudices and ask uncomfortable questions. Films hold a special place for Indians as it’s one of the primary sources of entertainment, traversing through time and space. It crosses borders and speaks to variety of audiences. Feed Our Future campaign has a much needed and powerful message that will connect with the audiences and garner the support it deserves. The critical issue of hunger and malnutrition in India needs urgent attention,” said Nandita Das.

The creative force behind the new advertisement is Sir John Hegarty, of The Garage Soho. The advert highlights the potential lost to the world when children’s voices are silenced due to hunger. The poignant narrative of the ad sees a group of Syrian refugee children who were selected from the local community playing in rubble and gazing out of bombed-out buildings in an apparent war zone.

“We think that this year’s campaign is even more emotionally engaging, and we expect more people will respond to our call.  In a world full of noise, cinema has proven incredibly effective for us at cutting through to not only establish our brand, but also to convert cinema goers into active supporters and donors,” said Corinne Woods, Chief Marketing Officer at WFP.

Last year’s global results showed the advertisement helped to double awareness of WFP among those who saw it and raised more than half a million dollars through online giving and through a 38% increase in downloads of WFP's Share the Meal donation App.

“UFO was the India partner for UNWFP’s 2018 campaign and it was a very successful campaign for WFP, learning of the successes of last year, we are pleased to extend our UNWFP partnership into 2019. We are very confident that the partnership will help drive the message of zero hunger deeper into the hearts and minds of India,” said Siddharth Bhardwaj, Chief Marketing Officer, UFO Moviez, India’s in-cinema advertising platform.

“We strongly believe that Big Ideas need the Big screen to make an impact. UNWFP’s campaign will run across UFO Moviez network of 3500+ screens, the campaign is packaged in an emotionally stirring 70-sec ad film and is scheduled to run for a period of eight weeks. We are certain that our network of cinema screens coupled with the powerful message crafted by Sir John Hegarty will help UNWFP engage with the Indian audience and inspire people to support an important cause of eliminating hunger from our planet,” Bhardwaj added.

Nutritionist Pooja Makhija, who just released her book “N for Nourish”, spoke about the importance of nutrition during the first 1000 days of a child’s life. Actors Gul Panag and Minnishha Lamba and director Mira Nair also lent their support to the campaign.

“Hunger and malnutrition affect a high number of our children and women population and are causes for concern. Visuals are an important storytelling medium and has a way to involve the family, community and society at large to be a part of this conversation. The responsibility lies in each of our hands; if each one of us is sensitised to the cause of Zero hunger we can go a long way in reducing food wastage and create an ecosystem to eradicate this altogether. There is a need to create active awareness and collaborate towards effective partnerships on multidimensional platforms. We look forward to making a positive difference by associating with UNWFP for this initiative," said Amit Nair, Business Head, LF.

Global food insecurity and malnutrition is an issue affecting millions across the world. In India, nearly two out of five children under the age of five are suffering from stunting – meaning they are too short for their age. WFP has been working in partnership with the Government of India for more than 50 years to help the country achieve food and nutrition security.

“While India has made tremendous progress in the last few years in eliminating hunger and malnutrition, all of us need to continue working together to sustain the momentum and ensure that we achieve this goal by 2030,” said Bishow Parajuli, Representative and Country Director, WFP India.

For more information about the ‘Feed Our Future’ advertisement and campaign, and to know how to get involved in creating a world with Zero Hunger, visit: www.wfp.org.

One can support WFP’s ongoing food and nutrition security projects by downloading SharetheMeal app on your Appstore or Google play:  https://sharethemeal.org/en/index.html