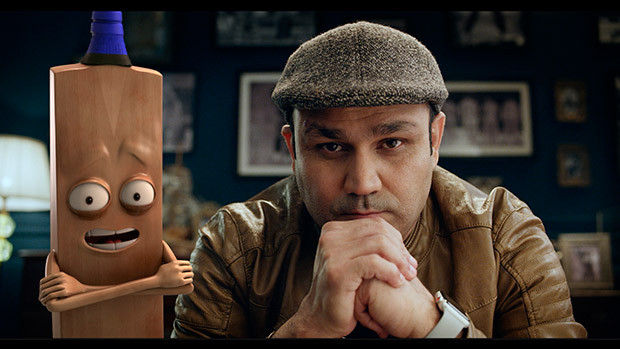 The campaign shows Sehwag taking on an animated avatar of a Bangladeshi ball in a simple game of ‘Chidiya Udd’, a game that most children in India have played, wherein the player raises a finger to indicate if the person/thing named by the opponent flies or not.

The campaign is based on the fact that Bangladeshi fans haven’t held back in notoriously rejoicing their team’s victories, across social media platforms. Although Bangladesh has never won a T20 match against India, previous ODI wins against India witnessed rather overwhelming reactions from Bangladeshi fans. And a first-ever win in the upcoming series would definitely result in some sparks flying on social media.

Recent close encounters of the two teams have kept the fans at the edge of their seats. The Bangladesh squad has been aggressive in its approach on the field and emerged as the strongest contender against India from among the subcontinent’s teams, making the rivalry bigger than ever.

Virender Sehwag said, “Bangladesh is a good side and the rivalry has snowballed since their win in the 2007 ICC Cricket World Cup and when we toured Bangladesh in 2015. However, Bangladesh hasn’t tasted success in the T20 format as India has consistently beaten them in all encounters between the two teams. The off-the-field banter is noticed in both camps. Bangladeshi fans take their cricket quite seriously and we have witnessed an outburst on social media with significant online trolling in the past. It is going to be an exciting series and I can’t wait to catch the action on field.”

With an aim to cater to fans of all ages, the campaign creates an exciting cricketing universe using a combination of animation and live action to bring alive the fan banter. The Bangladesh tour of India consisting of three T20Is and two Test matches begins on November 3 and will be broadcast on the Star Sports Network and Hotstar in Hindi, Tamil, Telugu, Kannada and Bangla.

As the Home Season of Cricket begins, fans will be treated to a cricketing feast, with the opportunity to view the Men in Blue take on Bangladesh, West Indies, Sri Lanka, Australia and South Africa at home and the tour to New Zealand in February 2020.