This Diwali, brands spread the light of happiness and hope

Despite the shadow of a slump in the economy, brands through their special heart-warming campaigns try to deliver a ray of hope this festival of lights and urge people to get over the gloom 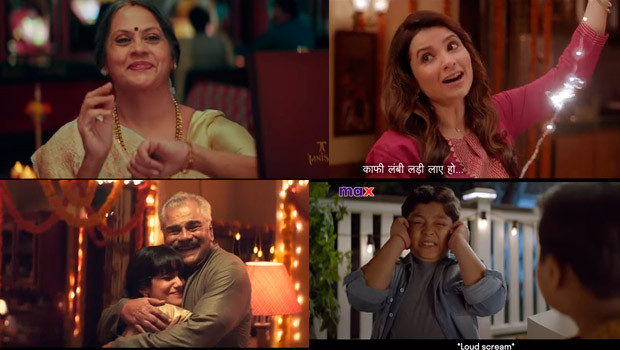 Brands across categories rolled out festive ad campaigns to celebrate Diwali, the festival of lights, highlighting the importance of family, love, hope and light as their core theme to strike a chord with viewers and to deliver the message that a slowdown should stop people from showering gifts and blessings on their loved ones. Here is a compilation of a few of them that stood out.

Tanishq’s new campaign brings alive the essence of age-old traditions, cultures and rituals that have been followed through generations. The campaign aims to take forward the age-old tradition of purchasing jewellery, which makes Diwali auspicious.

Conceptualised with Lowe Lintas Bangalore, the film encapsulates the spirit of Diwali celebrations and continuing the tradition of buying jewellery across generations in all its glory. The film brings to life various Diwali customs across the country of buying sweets, wearing something new on Diwali, lighting up each corner of the house and gifting jewellery. Highlighting the thought behind the collection Virasat, the film showcases the diversity among consumer, cultures and customs.

The TVC campaign shows how relations strengthen across different communities by revisiting their traditional roots and gifting their loved ones Tanishq’s jewellery while celebrating Tanishq Wali Diwali.

Ultratech Cement illustrates the joys of celebration using an emotional moment between a young couple who want to do up their house this Diwali and realise that all said and done there are certain limitations of staying in a rented place. They smile at each other and say next year they will celebrate Diwali in their own house.

The film is conceptualised by Infectious, the brand's digital agency on record.

IGP.com, a gifting site, through its partner The Womb has rolled out a new campaign to lift the mood around Diwali despite the sombre economic environment.

The film talks about spreading positivity by communicating that no matter what the economic situation is, gifts always bring a smile, spread cheer and lift spirits.

Max Fashion’s campaign “Max Diwali Khushiyon Wali” consists of two new brand films that celebrate the essence of relationships. The campaign conceptualised by Wunderman Thompson draws attention to the everyday moments shared between loved ones and urges families to cherish those small moments and the relationships.

The first TVC revolves around a couple who share a moment of love, amid the busy festivities of Diwali. When the wife, dressed in Max fashion attire, is all set to celebrate festival of lights, the husband, finding a jiffy moment, points to the mirror, complimenting how graceful she looks and the film captures the beautiful bond that transpires between the loving couple.

The second TVC revolves around the mischievous relationship between two kids during the Diwali festivities. While one of the kids shows off about the loudspeakers he was gifted for Diwali, the other kid tells him that he has something louder than his speakers. He then goes on to call his sister who upon seeing her Diwali gift from Max Fashion screams on top of her voice, leaving her brother completely amused.

PayPal India’s, ‘Ab Diwali 365 days wali’ campaign is built on the core consumer insight that festivities and shopping don’t need to have a season, it aligns with PayPal’s focus on becoming an everyday part of a consumer’s life. The digital-led campaign’s creative duties are being managed by Tonic Worldwide.

With eight contextual videos across food, fashion, travel, entertainment and health, the campaign banks on influencers across these verticals in slick bumper ads and 30 seconder formats.

Consumers using PayPal for their Diwali purchases across food, travel, entertainment, health and fashion merchants will be able to avail the benefits of their purchases through the year.

Maruti Suzuki India’s new four-minute video campaign highlights the celebration of every festival with the purchase of a new car.

Conceptualised by Dentsu Impact, the new commercial wishes to enhance the celebration and happiness in bringing home a new Maruti Suzuki car with the various rituals conducted.

The campaign is titled ‘Ghar Aaya Tyohar’ and draws attention to all models sold via the company’s Arena showrooms, which include the Swift, DZire, Celerio and WagonR, etc.

The TVC portrays Home Credit’s commitment to ready access to credit and how small ticket purchases can add meaning to a consumer’s life. It illustrates how everyone looks forward to gifts and time with their loved ones, just like the protagonist in the TVC who gifts himself a brand-new smartphone with the help of Home Credit financing so that he can spend time with his family, albeit, virtually over a video call. The campaign highlights the role of Home Credit in enabling financial inclusion in the lives of many, even the customers with no credit history.

The objective of the TVC is to focus on the first-time borrowers segment to which it offers various financing options and establish Home Credit as an inclusive lender.

The film has been conceptualised by L&K Saatchi and Saatchi under Creative Head Chetan Kapoor.

The film shows the father of the family being involved in various Diwali-related rituals with his family and friends. In one scene, the daughter playfully steals a laddu and runs off and the father runs after her only to give up half way. This is where the main message of the film is brought to light and the father is forced to rethink about his lifestyle.

The 360-degree campaign roll out will be in three phases. Each phase will encapsulate various activities. Phase one will see the teaser campaign on social media. Phase two will see the launch of the brand film and customer/employee engagement activities. In phase three, social media will be used to sustain the campaign.