Spread the joy for yourself and others this Diwali, say brands

From showing the festive mood of Indian households to initiating talks on social improvement, brands have done it all to spread cheer this festival of lights 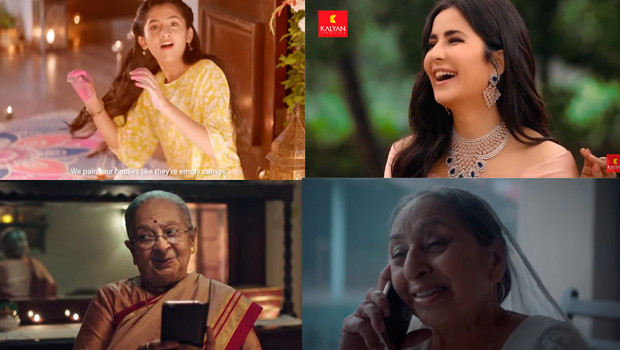 The festival of lights has arrived and brands have become part of the celebrations with beautiful and meaningful campaigns. Festive campaigns by Samsonite, RadioCity, Great Learning, Vodafone, Spaces by Welspun are some of the clutter-breaking initiatives that resonate with the festive fervour. Bestmediainfo.com compiles a few of them.

This Diwali, Samsonite India took a different route and delivered a story of unrecognised faces.

The brand brings the attention of people to the travel enablers across railway, roadway, airways, etc., urging everyone to take a moment to offer gratitude to them and wish them Happy Diwali as they miss their Diwali for our “#DiwaliKaSafar” – one of the largest domestic travel seasons.

To commemorate this message, Samsonite has showcased the experiences of four working individuals on Diwali. Conceptualised by Autumn Grey, a series of overlapping shots, the protagonists are introduced — Balbeer, a bus driver, and his mother; Snighda, an air hostess; Mohan, a taxi driver and his children; and Tapas, a ticket collector on a train.

Thoroughly dedicated to their work and having no qualms on foregoing their Diwali holiday, the TVC showcases how each one of them miss their family on this special occasion. Similarly, it is shown how their families' enthusiasm for Diwali is dampened by the absence of their loved ones. But as the night progresses, the spirit of the festival uplifts all of the protagonists as the passengers share Diwali greetings with them upon arriving to their destination. The TVC ends with all four protagonists coming to understand the true value of their work.

Radio City’s with its #MumbaiKiJalegi campaign initiates to light up every nook and corner of Mumbai city by installing solar LED streetlights. Through this campaign, Radio City aims to tackle the pertinent issue of faulty or no streetlights by driving sustainable electrification in the city. Eminent personalities like Tapsee Pannu, Bhumi Pednekar, Rajkummar Rao, Mouni Roy, etc., have voiced their support to make this campaign a success.

As a part of the initiative, RJs urged listeners on air to share stories about the area where streetlights are either missing or are under maintenance and cause hindrance to their lives. Ever since the campaign kick started, Radio City received numerous complaints and suggestions from Mumbaikars through calls and messages to help address the issue.

Lack of proper streetlights makes most of the areas in Mumbai unsafe for the citizens. Radio City team extended the campaign on ground, where the RJs visited the Abhyas Galli in Worli, a place where street students depend on lampposts to study at night. In association with Schoon Energy, Radio City installed solar streetlights in the area, thereby making it a Happy Diwali for the students and residents of Abhyas Galli. The team will additionally identify and shortlist more such areas that require urgent attention and share the update with local government bodies, to help mount solar streetlights. Through this campaign, to celebrate and augment the #MumbaiKiJalegi campaign, Radio City created a rap song video ‘Har Diwali Ghar Roshan, Iss Diwali Mumbai Roshan to give Mumbaikars an overview of the initiative.

Oppo India launched a unique “#BrightSideOfNight” campaign for the ongoing festive season. Oppo has placed an innovative reflective external wrapping on the Gurugram Rapid Metro with “See The Bright Side of Night” text branding that glows in the dark. Additionally, some routes of the Delhi Metro and Mumbai Metro will also be a part of the campaign with a standard external wrap.

The campaign highlights Reno2’s revolutionary feature of Ultra Dark Mode on its 48MP quad-camera that allows users to capture night shots with stunning clarity. This campaign with the Metro helps connect with young commuters which are a core target audience for Oppo India.

As a part of the campaign, Oppo launched three brand films that help showcase the “The Bright Side of Night” capabilities of the Ultra Dark Mode of the Reno2 series. The films highlight the bond shared by people with their special ones during the festival time and how the Reno2 series smartphones are ideal to capture the special moments with your family.

Identifying this consumer behaviour, Vodafone has launched a heart-warming campaign encouraging people to share #YourWordsNotForwards this festive season with a personalised greeting to their loved ones.

The digital film conceptualised by Ogilvy South weaves the story of a grandmother and her grand kid to show how in this world of forwards, personalised greetings bring people closer and fill hearts with love and warmth.

Nivea has launched its first ever hand cream range in India with a new digital film called ‘Busy Hands’ focusing on the importance of hand care this Diwali. The campaign is conceptualised by FCB Interface, Mumbai.

The digital campaign showcases the essence of long-standing Indian traditions, cultures and rituals that have been followed through generations. The videos encapsulate the various customs and traditions such as lighting up the house with diyas, wearing new clothes, gifting jewellery and celebrating the festival of lights with family and friends. The videos depict candid moments which are a common sight during the various festivities.

Pigeon Cookware’s #CookMagic campaign shows a young couple winning over the heart of their neighbours with homemade sweets prepared with the ‘magical’ touch of Pigeon.

The digital campaign has been conceptualised by Dentsu Aegis Network Pvt. Ltd. Set in an urban Indian context of community living, with a young couple who are rooted in their tradition yet create ‘magic’ in their own way. The film has relatable, everyday people, each with their distinct lives yet with a unifying common thread — their love for food.

The #KhaoKheloKhushRaho campaign of Kinder Joy, the confectionery brand of Ferrero Group signifies the pure moments of joy, cherishing the family togetherness during Diwali with something tasteful for kids to enjoy. It revolves around the concept of kids gifting during festivals, spreading happiness in a child’s life.

Building on the kids’ excitement during festivals, the campaign beautifully captures the rituals and traditions of an Indian family during the auspicious occasion of Diwali where the kids seek blessings from elders and they reciprocate it with a unique blessing of ‘Khao, Khelo, Khush Raho’ – the special blessing which excites them as they get Kinder Joy as a Diwali gift. As the kids relish the bite of milky cream with crispy wafer and assemble the surprise toys, the mother shares her belief for Kinder Joy and spreads the message of real happiness with Kinder Joy which is their special festive gift on Diwali.

Great Learning, an ed-tech company for working professionals in India, launched its digital campaign focusing on #NewBeginning. Conceptualised and created by Blue Bot Digital, the campaign aims to reconnect professionals to believe in their dreams and let their careers take a new path. The campaign has been designed primarily for the company’s social handles. To further amplify the campaign, Great Learning is also hosting a contest on their social media platforms asking followers to share their wildest ambitions; where the most heartfelt ones will be rewarded. The company expects the campaign to reach millions of working professionals across the country.

This campaign includes an ad film featuring quirky and heart-warming interviews of kids, who share their career ambitions. It aims to take professionals down the memory lane when as kids they used to dream big and how with time, they have lost that spirit and started settling for less. It then exhorts them to be more ambitious, take greater control of their careers and upskill themselves for a giant career leap.

#RevisitYourRoots campaign by Veave’s studio focuses on the new-age fad for western clothes and designs that has taken over the Indian fashion industry and individuals at large. The brand through this campaign attempts to reignite India’s love and sense of amazement for ethnic clothes beyond the festive season. ‘Revisit Your Roots’, as the name suggests, is a commitment towards restoring the influence of Indian clothes on both the domestic and global market.

As part of the #GiftAGoldenDiwali campaign, Ferrero Rocher is creating a unique brand experience for its consumers through golden and shiny in-store visibility, shopper activation, and digital and social media engagement. Ferrero Rocher offers an unparalleled experience of Italian craftsmanship, heritage and culture. For in-store consumer engagement, Ferrero Rocher has installed premium and elegant display units in selected modern trade stores across Delhi, Mumbai, Pune, Bangalore, Hyderabad and Kolkata. To create memorable moments, Ferrero will be creating a visually stunning ‘Golden Zone’ photo booth inside premium modern trade stores at Delhi for consumers to click pictures of themselves and send them as customised Diwali e-cards to their loved ones.

Consumers will also be exposed to Ferrero Rocher precious Diwali TVC on YouTube and OTT platforms like Sony Live and Voot.

Livpure India’s launched its new campaign ‘#PureCelebration’ with an objective to establish a more personal connection with its audience, around this occasion of "coming together". A connect that could be more relatable, memorable and trigger conversations around the brand. The campaign is conceptualised by Digital Refresh Network.

The film shows how a grandson makes his grandmother stay long with them by making her comfortable with Livpure products.

Spaces, Welspun India Limited’s textile brand, has launched a campaign to introduce its limited-edition festive range ‘Rangana Collection’. Having received great response from the consumers last year, the brand has introduced the collection again, with a variation. Known for its thoughtful designs, the collection draws inspiration from the vibrant art forms across India, celebrating the diverse cultures of each region.

Conceptualised by Ogilvy, the campaign kick starts with two digital films that depict how the Indian art forms are translated into awe-inspiring bedsheets. The first film, which narrates the exquisite tales from the land of Kashmir, portrays a woman sitting on the bed trying earrings from a beautiful Gulrana jewellery box. With the sound of the doorbell, she leaves the room leaving the box behind on the white bedsheet. The scene then shows how the intricate Gulrana design on the box shimmers and starts growing beyond the box, spreading all across the bedsheet. The second film is based on Bihar’s art form Madhubani. The film begins with a beautiful Madhubani scene painted across a mud wall in a village, which comes alive depicting men, women being chased by a lion. At the growl of the lion, the leaves in the painting fly onto the white bedsheet that is drying adjacent to the wall.

Rooted into the nuances of the Indian culture and tradition, this latest campaign #BadiFamilyBadiDiwali of Cadbury Celebrations throws lights on the joy of celebrating festivals with your family to create memories that will last you a lifetime.

The film shows how a wife surprises her husband on Diwali night by inviting his big family to their home and celebrating Diwali together.

As part of the campaign, the brand encouraged people to share portraits of those special moments spent with their big family on social media with the hashtag #BadiFamilyBadiDiwali and win the opportunity of it being featured as an outdoor advertisement. The brand received entries from across India through Facebook and Instagram. ‘Kishan’ family, New Delhi, was chosen as winner, as the Badi India family with most number of members in the photo. They will be featured in the Cadbury celebration outdoor ad. A campaign video has been shot and will be amplified on digital platforms