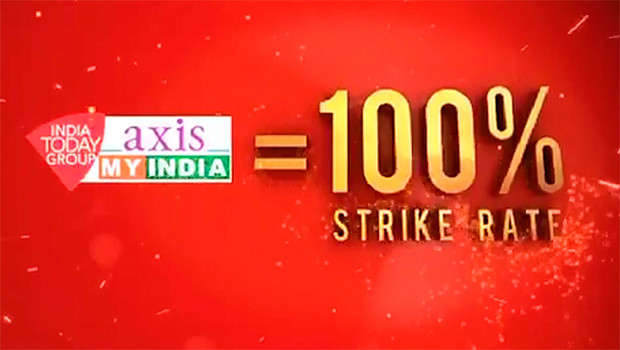 Elections can be unpredictable for political parties. But their results aren't for the India Today Group, the company has said.

As every other media outlet faltered in its forecast of the Haryana and Maharashtra assembly elections, the India Today-Axis-My-India exit poll delivered the most accurate picture of around 11 crore voters in the two states.

Almost all other pollsters and TV stations were unanimous in predicting a BJP sweep Haryana, led by Chief Minister Manohar Lal Khattar.

It gave the Dushyant Chautala-led Jannayak Janata Party (JJP), a breakaway faction of the Indian National Lok Dal (INLD), between and six and 10 seats.

By Thursday evening, at time of writing, actual results were much the same as India Today's predictions -- the BJP led successfully in 40, the Congress in 30 and the JJP in 10 constituencies.

Other pollsters, however, were not really able to capture the voter pulse in Haryana accurately. In its exit poll, Republic-Jan Ki Baat had given the BJP 52-63 and the Congress between 15 and 19 seats. According to News18-IPSOS, the ruling party was poised to secure 75 and the Congress 10. ABP-CVoter charts indicated 72 for the BJP and eight for the Congress. Times Now predicted 71 for Khattar's party and 11 for the Congress led by Bhupinder Singh Hooda, the Leader of Opposition,

In Maharashtra, the actual outcome came closest to the India Today-Axis-My-India's predictions for the BJP-Shiv Sena alliance, unlike several other pollsters forecasting a landslide for the ruling coalition.

According to the India Today-Axis-My-India survey, the BJP-Sena alliance was projected to secure between 166 and 194 seats and the NCP-Congress combine from 72 to 90.

By Thursday evening, election results at time of writing showed the ruling coalition leading successfully in 159 of the state's 288 constituencies and the NCP-Congress combine in 105.

Compare this with exit polls executed by other players.

According to ABP-CVoter, the BJP-Sena was projected to win 204 and the opposition combine 69.

"I think getting the exit poll right again, especially against popular belief, separates news channels from propaganda channels," said Kalli Purie, Vice-Chairperson, India Today Group. "It's our approach on ground reporting and non-alignment that we were able to read data with a level of understanding. And doing it in Haryana elections, where the margin on so many seats was so slim, is a validation of the scientific and thorough approach of Axis," Purie said.

Of all the elections that took place in India between 2013 and 2019, India Today-Axis My India post-poll surveys have given the most accurate predictions in 95% of the cases.

Conducting the largest exit poll for the world's largest democracy the 2019 general elections, the India Today-Axis My India exit poll, for instance, predicted 339-365 seats for the BJP-led NDA and 77-108 seats for the UPA in the new Lok Sabha. The actual results weren't different -- the NDA got 352 and the UPA 92 seats in the lower house of Parliament.

Axis-My-India chief Pradeep Gupta attributed his successful predictions to team work and scientific monitoring of voter behaviour. "We follow international best practices. Our methodology is highly refined that helps us eliminate margins of error," he explained. "Our sampling is the most demographically representative in any given election. We closely, and continuously, monitor voter mood and intent."