FCB Interface brought together Virat Kohli with 10 of his lookalikes for the latest Blue Star campaign. The insight was how do you communicate 30% more cooling when there are more people in the room? That too with Virat Kohli in the lead. Simple! Get 11 Virats.

This new campaign from Blue Star marks the beginning of the company‚Äôs association with Virat Kohli, one of India‚Äôs biggest stars. It highlights a world in which multiple Virats coexist and how the Blue Star inverter AC manages to cool them at ease with its ‚Äò30% more‚Äô cooling feature.

In line with Blue Star‚Äôs signature style, the new campaign is eye-catching, humorous and quirky. It opens with Virat Kohli in a living room, switching on his Blue Star inverter AC and settling down comfortably on a couch. Suddenly, his look-alikes enter the room one by one, with similar features, similar beards and similar hairstyles. They are even dressed like him. While Virat is taken aback, the AC responds immediately and starts cooling more generously to make sure everybody in the room is comfortable.

Vir S Advani, Vice-Chairman and Managing Director of Blue Star Limited, says, ‚ÄúOur new campaign reflects how Blue Star, a 76-year old company, remains young and relevant with world-class products, solutions and processes. Virat‚Äôs youthful image and his commitment to deliver excellence on the field makes him a great fit for us. We are market leaders in many product categories and segments and pride ourselves on being innovative. Virat is a born leader with a winning instinct, raising the bar every time and always willing to experiment. But the real fit is the trust factor. Hundreds of millions of cricket lovers across the world trust Virat for his expertise and consistent performance. And Blue Star has been built on the trust of millions of our customers. Not surprisingly, Virat was a natural choice for us!‚Äù

‚ÄúVirat excels in all the three formats of cricket. A bit like how Blue Star is a leading player in all air conditioning formats; residential, light commercial medium spaces and large spaces such as airports, hotels and hospitals. In our new campaign, we highlight three unique features of our new range: up to 30% more cooling when needed, purifying air while cooling and voice control,‚Äù added B Thiagaragan, Managing Director of Blue Star Limited.

Speaking about the brand, Virat Kohli said, ‚ÄúBlue Star is a well-established brand and definitely the best in cooling. So it was a no-brainer for me to be associated with a brand like Blue Star‚Ä¶I have never shot a campaign like this where there are so many quirks. It was very different from what I have done in the past and it‚Äôs definitely a campaign that people are going to love to watch.‚Äù 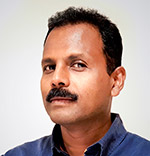 Robby Mathew, Chief Creative Officer of FCB Interface, said, ‚ÄúThe Blue Star Inverter AC senses when there are more people in the room and gives 30% more cooling. What better way to bring this unique feature alive than to feature more than one Virat in the room. That‚Äôs how we developed the idea of using his lookalikes. The campaign comes alive with this thought in several ways, in multiple media; print ads, hoardings and even digital content.‚Äù

Director (of the TVC): Ashim Ahluwalia