Brands in a joyous mood this Durga Puja

Be it talking about women power, going the musical route, showcasing the enthusiasm of youth during this festival, inviting daughters to be home who stay far away just like Ma Durga who visits her parents every year during this time — brands have done it all through their beautiful campaigns 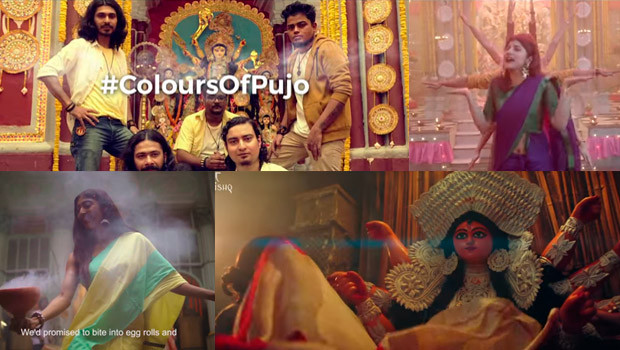 People eagerly wait for a year to welcome the Mother during Durga Puja. This religious occasion is not only about festivities, but has an emotional connection, especially in Kolkata and other parts of eastern India. Brands too came up with beautiful creatives to connect with their target audience this year. Here is a compilation of a few of them.

Jewellery brand Tanishq launched a TVC film this Durga Pujo, celebrating the strength, spirit and zest of the modern and progressive Bengali women through a community Pujo pandal organised and supported by women.

The film dwells on a unique and novel concept and features three protagonists who are at the helm of the organising committee of pujo and charts out the contributions from an all-women group — starting from the female potter at Kumortuli, to the women and girls helping out with all aspects of the pandal preparations, to the female purohits and dhaakis. Devi Durga being welcomed by Bengali women who are no less than Devis themselves is a real treat to the eyes.

This scenario is not so uncommon in present day Bengal and this pujo, Tanishq wanted to pay a tribute to this very spirit of contemporary Bengali society. The film is high on emotions and essentially captures the pujo sentiments beautifully. The lively background score in the TVC has been penned down by lyricist Chandril from the Bengali band, Chandrabindoo. The film showcases Tanishq’s ‘Aishani’ pujo collection.

This year, to add to the vibrant arrangements, Asian Paints Sharad Shamman is presenting #ColoursOfPujo. A musical celebration of the many shades of Sharodiya that captures the carnival of spectacles and colours that leaves Bengal awestruck every year.

Partnering Asian Paints are three renowned Bengali bands — Cactus, Lakkhichhara and Goshai Gang. Each of them presenting a pujo special song, set against the background of a colour that represents Sharodiya. To that end, three different colours were chosen — blue, red and yellow. Each of the songs celebrates the coming of the Goddess, and highlights the colours as they appear through the course of the festivities. The songs are sure to take every listener through a corridor of relatable childhood memories. The blue Aparajita flowers, red Sindoor and yellow Atashi flowers come alive, strung together with music that will leave one humming for the rest of the day.

TOI Phirey Esho Kolkata, a campaign that celebrated Kolkata Pride at its best to talk of a city on the march of progress. In season 2, it celebrates Kolkata’s biggest extravaganza – Durga Pujo, invoking the Bangali to come back home for Pujo. The creative concept is Maye Ghore Asche.

Pujo, the giant celebration brings the best of Kolkata on the roads, the best culture, fashion, food…and to this Kolkata, it invited all to return to enjoy to unbidden fun of Pujo among their loved ones. But it did so, with a twist.

Durga is always Ma, the all-powerful mother figure who defeats the Mighty Mahishasur. But, she is also a daughter; a daughter who comes home to Baaper Bari (parents’ home) and the biggest symbol of a daughters’ homecoming is Pujo. When the city leaves no stone unturned to shower love on the return of its beloved daughter; readying for this homecoming by getting decked up in all its finery, preparing grand fest scale, getting every nook and corner decked up and much more to make her homecoming grand.

In Phire Esho season 2, it celebrates the homecoming of the daughter; of the many Durgas who have moved away from their city and call every one of them to come back home for Pujo.

The campaign continues the original thought of Phirey Esho Kolkata through this activation, asking the residents to invite their daughters to come back with their friends and family to Kolkata during Pujo and be a part of the celebrations. The letters were to be written and sent to TOI and for the best selected entries, TOI would sponsor their daughters to come back to Kolkata for Pujo.

The campaign has two variations:

For Kolkata: Asking Kolkata people to invite their daughters and their family.

Outside Kolkata: Encouraging daughters to visit Kolkata during Pujo with their family and enjoy the grandness of Kolkata and company of their loved ones.

Watch brand Sonata has released a regional film taking the musical route, showing that no Puja outfit is complete without a Sonata watch. It showcases its latest and modern range of watches for men and women which go with different outfits during the festive range. It tried to target young, Bengali Durga Puja revelers in West Bengal and rest of India.

Tags: Durga Puja Brands in a joyous mood this Durga Puja
Advertisment
More from this section