Samsung’s two unique solutions — Good Vibes and Relúmĭno — come as a relief for the deaf-blind and their caregivers by providing a strong communication tool for the deaf-blind and enabling people with low vision to see better. The brand’s agency Cheil WW has conceptualised and executed the campaign around the life-changing product innovation 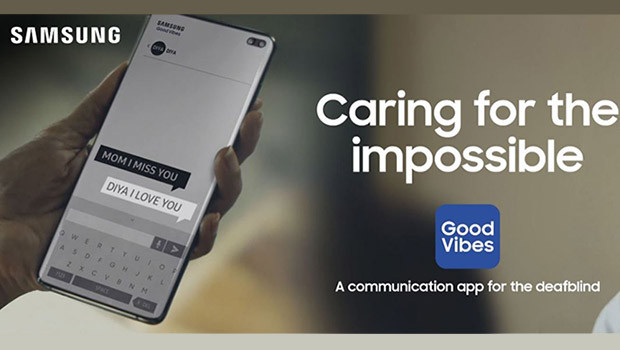 Product innovation blended with technology is increasingly solving human problems. Today, brands, with the support of creative agencies, are coming up with solutions that are making our life easier. One such brand is Samsung.

Samsung’s two unique solutions — Good Vibes and Relúmĭno — come as a relief for the deaf-blind and their caregivers by providing a strong communication tool for the deaf-blind and enabling people with low vision to see better. The Good Vibes app solution is under the brand’s CSR practices and was conceptualised, designed and developed last year by Cheil WW India, a creative agency for Samsung Electronics in India. “Our final objective was to give deaf-blind people a voice and that got fulfilled with the current version of the app. We wanted to jump in and announce our presence with the complete app and not wanted to be in a work-in-progress conversation. There was a lot of training and travel with deaf-blind people to understand their challenges and needs and then taking it to the back-end and then tweaking the app and work on its technology, converting the research more into voice and voice back,” said Trivikram Thakore, VP, Samsung India.

A recently launched digital video on the Good Vibes app shows the impact it can have on the life of a deaf-blind individual. The video showcases a deaf-blind girl who shares a special bond with her mother even though they can’t talk to each other. But when distance comes between them, her mother seeks a new way to communicate with her daughter via using the Good Vibe app on the Samsung Galaxy handset. Speaking on the idea of associating Samsung with the Good Vibes project, Emmanuel Upputuru, CCO, Cheil WW India, said, “Samsung is a company known for bringing new technologies to the world that improves people’s lives. Partnering with Samsung for Good Vibes will empower and enable to expand that world to include the deaf-blind community in new ways. This two-way communication tool for them will now help them communicate with the world like never before.”

For the brand and the agency, the motto behind this campaign is to raise the awareness about the app and cater to deaf-blind by making their lives simpler.

To increase its scalability, the brand will soon launch the app on the android play store for everyone using android phones. At present, it’s available only on the Samsung play store.

According to Upputuru, in terms of ideating for a product, which is all about using a simple insight into the life of deaf-blind, the challenge was not to go overboard in storytelling.

“Deaf-blind people depend on touch for all communication. If you are not within their reach, there is no way to communicate with them and Samsung Good Vibes helps them and their caregivers to overcome this limitation. So we just captured this in the story,” he said.

“We had already tested the app at various Sense International centres in India and interacted with the deaf-blind to understand their daily challenges,” he further adds.

The complete shoot was in the presence of educators from Sense India.

Thakore pointed out that the campaign shows the ease of communicating with the deaf-blind and showers freedom of expressing self-thoughts of deaf-blind people to everyone, anywhere without support. It is purely a gap bridged by the brand and its creative agency.

The campaign has been promoted on Facebook and YouTube. Within a week, the campaign has garnered 65,822,109 views. “We are using YouTube and Facebook to run the long-format story-telling content and we will continue doing it for the next six to eight months,” Thakore said.

“Samsung Good Vibes can actually help a universe of deaf-blind and their caregivers and may even increase the size of their social circles slowly,” said Upputuru.

As part of its citizenship Initiatives, Samsung has partnered with Sense India, a not-for-profit organisation dedicated to improve the lives of the deaf-blind, to take Good Vibes across the country. Samsung has so far conducted training workshops for Sense India educators and deaf-blind individuals along with their caregivers in Delhi and Bengaluru.

“We have planned our training workshops to expand to Nashik, Goa, Ujjain, Kolkata and Raipur cities,” said Thakore.

The app won four Abby Awards at the GoaFest, 2018, silver in the technology innovation category at the New York Festival Advertising Awards, gold in communication design category at Mobile Grandprix, including Gold Abby for Technology (Utility/Tool).

Upputuru said, “To win awards for campaigns is every person’s wish but we have achieved better. When we saw the deaf-blind interacting with the outside world through our idea, we won right there. A win-win on bringing smiles to faces who never expected such communication way for themselves.”

There have been product and technology innovations happening around the world, is it a long way for the Indian advertising industry to reach that level?

“Maybe you could say the world had a head start. But we are seeing great innovations coming from our land and I see the gap reducing. If necessity is the mother of inventions, we have more mothers because there are more real needs,” Upputuru said.