How Bigg Boss draws advertisers with its pre-launch buzz

From speculation on celebrities to the 360-degree promotions, Colors’ Bigg Boss, which kicks off its 13th season on September 29, has always been high on buzz. The channel does it all to attract viewers and advertisers. But how does it impact advertisers and help it sell its inventories? 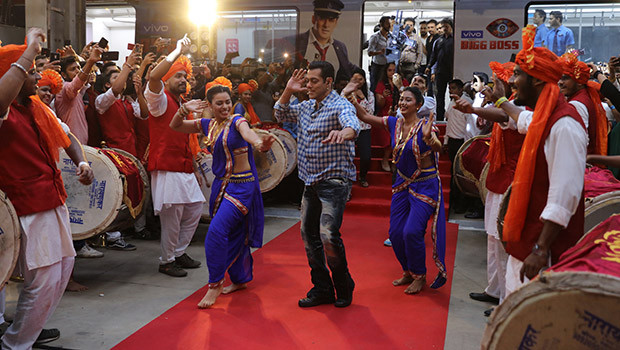 Despite being a high-budget show, Bigg Boss Hindi has remained profitable for Colors as the property has matured over the years. There are several factors that boosted the profitability of Bigg Boss but one of them was the buzz that was created around the show’s new seasons.

The moment new season of Bigg Boss is announced, there is a wave of speculation and buzz that goes around the viewers — from the excitement over the names of celebrities to the innovations in the format the show has to offer. And the buzz has not only helped Bigg Boss to retain its loyal audience base but has also allowed the broadcaster to attract advertisers even before the launch of the show.

Like every season, Colors revealed Bigg Boss 13 in style in a press conference in Mumbai on Monday. The show was literally flagged off, giving journalists a train ride with host Salman Khan. Even as Bigg Boss’ Express journey is all set to take the viewers on a ride of a lifetime, all won’t be that well in the Bigg Boss House. The twist in the tale will be the emergency chain that will put an abrupt halt to the game mid-season, albeit the entertainment will continue to ensue.

The new season will be a power play and will give viewers for the first time the experience of two seasons packed into one. Jostling emotions and combating tasks will make connections stronger and create survivors who will emerge victorious.

Another new in this season is that Bigg Boss house has moved to Mumbai, unlike previous seasons hosted in Lonavala and Karjat.

Produced by Endemol Shine India, the 13th season of Bigg Boss will begin on September 29 at 9 pm, and thereafter every day at 10.30 pm followed by weekends at 9 pm.

So how does a broadcaster generate buzz for its new season before the launch and how do these buzz impact advertisers and help the channel sell its inventories? Being one of the most popular shows of Hindi GEC Colors, most of the buzz around Bigg Boss is created organically. There is a lot of intrigue within the audience around the format of the show, celebrities who will enter the show and the new twist the show has to offer to the audience. The channel tries to build on these engagements and anticipation of the audience through its extensive marketing and promotional plan.

This excitement not only attracts audiences but also ignites the interest within brands towards the show. According to Nina Jaipuria, Head, Hindi Mass Entertainment and Kids TV Network Viacom18, they not only build on the excitement of the audience but also on the fact that it offers a great platform for brand engagement.

“I think brands also understand that it is a very big platform for them to engage with their consumer in a very customised and focused manner, which is very clutter-breaking. They come to Bigg Boss because the kind of engagement and integration they get from the show is unmatched. They get a lot of opportunities to customise, integrate, break the clutter and showcase all their brand requirements,” she added.

Anita Nayyar, CEO India and South East Asia, Havas Media, said the show offers good reach and heavy engagement to the brands, right from the time of its launch. “It is the reach of the show that attracts the advertisers and there is a lot of engagement with the brands. A lot of audience connect and engagement is offered through various initiatives such as selfie opportunities for smartphone brands. There is a lot of engagement that brands are able to do with the audience.”

According to an industry expert, the show offers four months of exposure to the advertisers, one month before the start of the show and three months when it is on air, which attracts brands.

Jaipuria said there is a lot of buzz around the show, not only before it starts but throughout its tenure. “There is a lot of excitement that happens during the episodes that feature weekly tasks. Normally there are three tasks every week — luxury task, captaincy task and weekend task, so every episode is full of inventory. Also, advertisers have seen the amount of integration we have done in the past with all our sponsors. Therefore, they know that the kind of potential and opportunity they can get to integrate their brands are unmatched. Which is why when we go out in the market, we get a lot of brand responses. This season we have conventional as well as non-conventional brands,” she said.

But what does the buzz cost? Jaipuria said they have managed to have a very sustainable marketing budget over the last 12 years. “The show doesn't really need much of marketing and promotions, the moment one says Bigg Boss is coming, the buzz just simply gets organically generated. We do have a big network and non-network promotion plan for the show that will include movie, music, news and regional channels. The show goes viral on digital, which is why we have a lot of focus on digital. It is not necessarily very heavy on budget but very heavy on innovations and activities,” she said.

For its 13th season, Colors is planning to present its multiplatform property across the medium. Since the broadcaster witnessed a positive response on its digital platform Voot last year, there is a special focus on the digital platform for this season. This year, Colors will introduce several digital initiatives to encourage audience engagement such as #BB13TedhaTask, wherein audiences will get to perform five tedha tasks every day and win a chance to take part in the Bigg Boss festivities.

Similarly, there will be other interactivity segments like ‘Video vichaar’, ‘Chugli booth’ and ‘Pulse meter’, where users will get a chance to participate in the content. For the first time, viewers will not only get to vote on Voot but can also vote through Reliance’s MyJio App. There are other activities lined up on MyJio App as well for Bigg Boss viewers such as  'sentimeter' and 'Jio Luxury Bazaar', an interactive game; and ‘Bigg Boss League', which will be based on a predict-to-win model. The select lucky winners will get to visit the Bigg Boss set and see Salman Khan live. On social media, the broadcaster is introducing an AR Instagram Filter that will go live during the launch week and will keep changing dynamically after every two weeks.

Apart from these, Voot will keep the digital viewers attuned to the exclusive content through its popular properties like ‘Unseen Undekha’, ‘Cutless’, ‘Bigg Buzz’ and new additions like ‘Voot Night Live - BB Edition’. This year, the channel will also do a Bigg Boss house reveal on digital-first in the coming two days. Generally, the house of Bigg Boss is revealed an hour before the premiere of the show.

“A lot of initiative and action is happening on digital this year. Last year, Bigg Boss became a lot bigger on Voot and had around 700million views and all the content around it, which is huge for us. A lot of engagement and initiatives are planned around digital,” Jaipuria said.

This season, Colors has roped in ‘Vivo’ as presenting sponsor of Bigg Boss, ‘Lays’ as a special partner. ‘Ching’s Chinese’, ‘PokerStars.in’, ‘BharatPe’, ‘Whirlpool’ and ‘Helo’ are the associate sponsors.